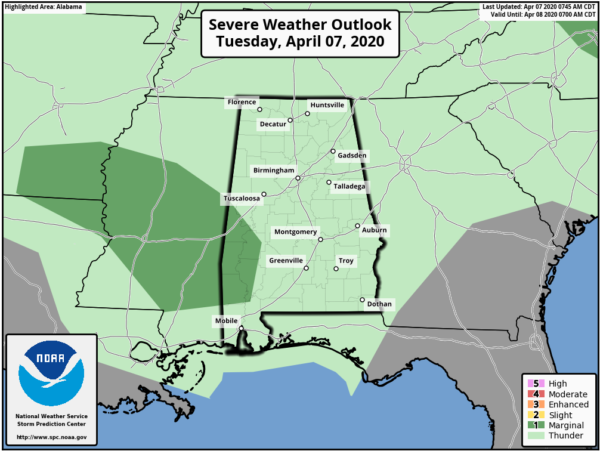 We have a Marginal Risk of severe storms this afternoon and into the evening for the extreme southwestern parts of Central Alabama. The main threats for today will be from isolated damaging wind gusts up to 60 MPH and hail up to 1-inch in diameter. The above radar animation is from the latest run of the HRRR valid today from 11:00 am through 3:00 am Wednesday.

As of 11:10 am, we have mostly cloudy skies across much of Central Alabama, but there are a few breaks in those clouds letting some decent sunshine down to the surface. Temperatures as of the 11:00 am roundup were in the lower to mid-70s across the area. Birmingham was at 74 degrees, tied with a few locations as the warm spot. Bessemer, Calera, and Prattville were tied at 70 degrees as the cool spots. Highs will top out in the mid-70s to the lower 80s. Lows will only dip down into the 60s. 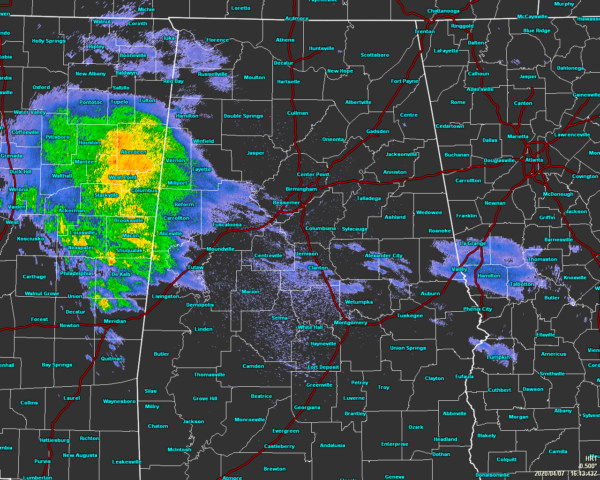 As shown in the model animation, radar is showing rain moving into the western parts of the area, especially over Vernon, Millport, Reform, Carrollton, Aliceville, and moving into Western Tuscaloosa.

Over the past week, there have been some big discrepancies in the long-range forecast models over what we should expect weather-wise over the Easter holiday weekend. One of the main reasons for that is because several airliners allow a few of the forecast model organizations to use data recorded while in the air making their scheduled flights. Unfortunately with most of the United States and parts of the rest of the world now having to stay home due to the pandemic, the weather data has been greatly reduced due to the cancellations of most of those flights.

Now that we are starting to get closer to the weekend, the European model has become more consistent with its projections over the last several runs and now the GFS model is starting to line up more to the European. With that being said, it now looks like Easter Sunday could be a stormy one with the potential of some severe storms thrown in. 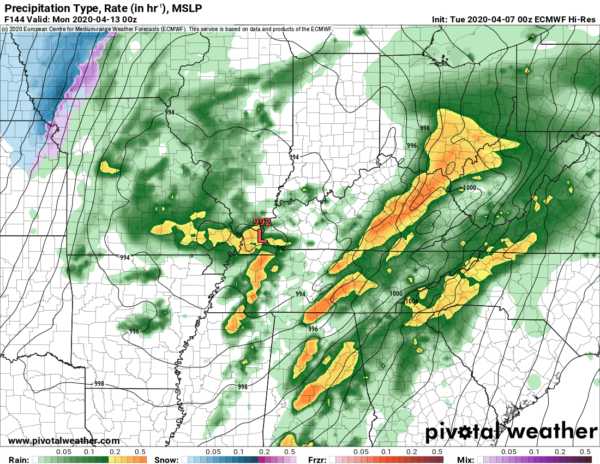 This image is from the latest European model run showing what to expect on Sunday around 1:00 pm. We see that a strong surface low will be moving through the southeast and will be located in the extreme western parts of Kentucky. A strong cold front will be trailing to the south and southwest from the low over the middle parts of Mississippi and down into eastern Louisiana. Out ahead of the front appears to be a broken line of stronger to severe storms which could possibly be in the form of supercells moving through much of Central Alabama at that time. 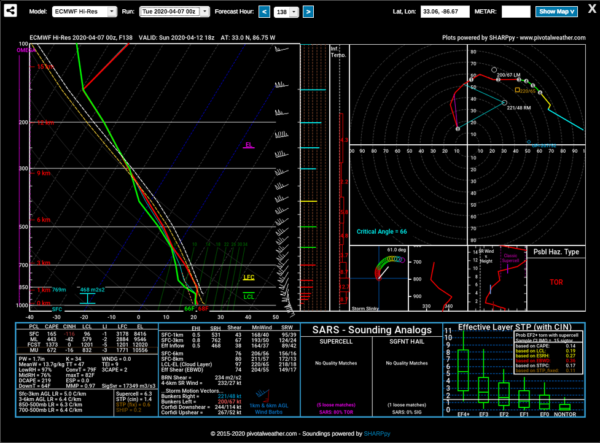 This latest European sounding projection for the Birmingham metropolitan area at the same time show there will be plenty of instability to work with (1373 J/kg) along with plenty of shear (67 knots at the 0-3 km level) and robust helicity (762 m2/s2 at the 0-3 km level) that we would have the potential for damaging winds up to and exceeding 60 MPH and a few tornadoes. These values will actually increase somewhat with the heating of the day and the Significant Tornado Parameter for around 7:00 pm is at 3.1.

At this point, the GFS is showing a secondary surface low forming and moving across the Florida Panhandle at the same time which would keep the main focus of the storms and the energy over the Gulf Coast and out over the Gulf of Mexico. The 1:00 pm sounding for Birmingham from the GFS does show a marginal threat of severe thunderstorms with isolated damaging winds up to 60 MPH possible, but it is nowhere near as impressive as the European.

So, here is the forecast at this point… I do believe that the GFS will move more towards the European model throughout the rest of the week and we may have the potential for strong to severe storms roughly from 9:00 am through 9:00 pm on Easter Sunday. All modes of severe weather look to be possible with damaging winds up to and exceeding 60 MPH being the main threat, with a smaller threat of a few brief tornadoes. As the higher-resolution, convection-allowing models come into target later this week, we’ll have a much better view at what to expect.

Bottom line… This is our main severe weather season in Central Alabama and we have to watch every system carefully that moves through the area during this time. While I know it is Easter Sunday, please go ahead and have your safety kits and supplies ready along with your place of safety ready to go well in advance. Be sure to have fresh batteries in your NOAA WeatherRadio and have a fresh set in your flashlights. While this does not appear to be a major outbreak, all it takes is for one tornado to come down your street to make it a major ordeal. Be prepared… Be weather aware.

7:00 AM | *Setting up for a nice weekend in the Tennessee Valley following passage of cold frontal system* — Perspecta Weather

Scenes from a New York City Protest of the Police Killing...