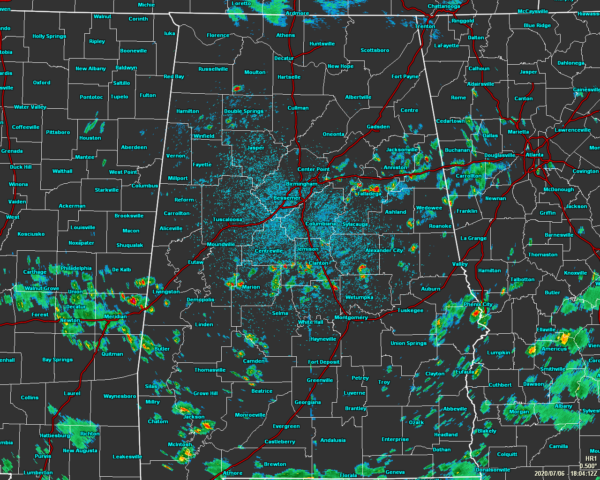 At 1:05 pm, we have scattered showers and storms that have already formed across the south and eastern parts of Central Alabama, especially for locations south and east of the I-59 corridor. So far, everything is staying well-behaved, but I wouldn’t be surprised if we see one or two grow strong this afternoon and into the early evening hours.

Temperatures as of the 1:00 pm Round-Up were in the 80s across the area, ranging from 81 degrees in Sylacauga to 89 degrees in Montgomery and Troy. Birmingham was sitting at 84 degrees.

We have a small low moving through the southeastern parts of Alabama and into the southwestern parts of Georgia and that will provide more than the necessary lift for scattered to numerous showers and thunderstorms to form with the heating of the day. We’ll also see some shower and storm activity work into the eastern parts of the area from Georgia as showers and storms will rotate around the low and move into Central Alabama. While rain will become likely for nearly everyone in the area, the better coverage will be along and south of a line from Greensboro to Jemison to Roanoke. Afternoon highs will be held down a few degrees due to cloud cover and rain, reaching the mid to upper 80s from southeast to northwest.

Tuesday looks to be a wet day across all of Central Alabama as numerous showers and thunderstorms can be expected throughout the day, but most of the activity will occur during the main heating of the day. Some localized flash flooding issues may occur due to the heavy nature of some storms as precipitable water values look to be around and just above 2 inches. Once again, a few stronger storms will be possible, but widespread severe weather is not expected. Highs will be in the mid to upper 80s.