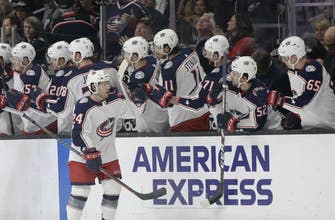 Kevin Stenlund and Gustav Nyquist also scored, and Elvis Merzlikins made 35 saves for the Blue Jackets, who are 5-0-3 in their past eight road games.

Alex Iafallo scored to extend his point streak to seven games but the Kings lost for the third time in four games. Sean Walker had a goal and an assist, and Jonathan Quick made 20 saves.

Stenlund made it 3-1 at 4:49 of the third by sneaking a wrist shot under Quick’s right arm.

The Kings cut the deficit to 3-2 at 11:15 when Walker scored on a wrist shot through traffic.

Nyquist added an empty-netter with 59.6 seconds remaining to cap the scoring.

Iafallo put the Kings in front 1-0 at 1:26 of the first period by scoring for the third straight game. He backhanded in Walker’s rebound for his fourth goal to go along with four assists during his point streak.

Alpine skiing: Faced with tragedy, Shiffrin chooses to give back

What sweeping cuts mean for minor league baseball and its players

‘Don’t Ever Tell Law Enforcement to Shoot to Kill Your Own...

This German town replicated itself in VR to keep its tourism...