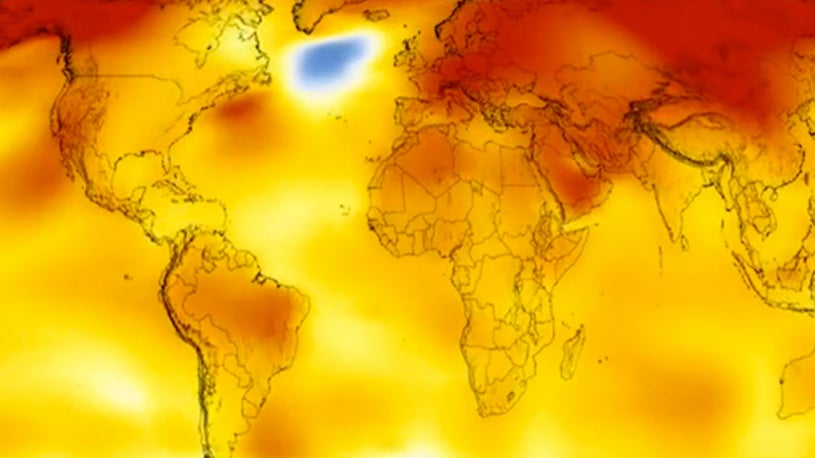 The influence of a changing climate is now evident in each day’s global weather pattern, according to a study published Thursday in Nature Climate Change.

“While changes in weather locally are emerging over decades, global climate change is now detected instantaneously,” said the study authors, who are based at the ETH Zurich research center in Switzerland.

The study shows how the fingerprints of a warming climate can be found on any given day’s global weather map even when some locations are cooler than average. For example, much of the United States had a chilly autumn even as the planet saw one of its warmest Octobers and Novembers on record.

“Uncovering the climate change signal in daily weather conditions calls for a global perspective, not a regional one,” said lead author Sebastian Sippel.

Global temperatures have warmed by close to 2 degrees Fahrenheit over the past century. The 10-year span from 2009 to 2018 was about 1.3 degrees Fahrenheit warmer globally than the period from 1951 to 1980. 2019 will likely turn out to be the second-warmest in more than a century of recordkeeping.

On a local basis, though, weather can vary much more dramatically, often departing from average by 20 to 30 degrees or more. These ups and downs make it more challenging to separate local trends from natural variations.

To tackle this challenge, the authors employed a computer-based technique called statistical learning, allowing software to compare and contrast daily global weather with the yearly global average temperature, as well as with Earth’s energy imbalance (the amount of incoming solar energy that is not released back out to space, thus warming Earth’s oceans and atmosphere).

These techniques were applied to observations as well as to reanalyses, or maps derived by computer models that fill in gaps where observations are sparse.

The authors found that each year’s global temperature from 1999 onward has departed from what one would expect from natural variation. When the amount of atmospheric moisture per unit of air (specific humidity) is considered along with temperature, the daily global weather pattern differed from natural variability on every day in the last seven-plus years.

“Global weather is now in uncharted territory,” said Sippel and study co-author Reto Knutti in an email. “While locally, of course, we need a few decades for a signal to emerge from variability, the global information allows us to now detect climate change for any single day since early 2012.”

Even when the long-term global trend was removed from the analysis, the fingerprint of climate change on daily global weather was still evident in regional patterns of temperature and humidity.

Ironically, the dramatic warming observed across polar regions such as Alaska was not the strongest signal of climate change in this analysis of day-by-day weather. The reason is that large temperature swings are so common at high latitudes that even huge departures from average may not equate to a climate signal that statistically transcends the noise of day-to-day weather.

Instead, the most impressive signal of change in daily temperature was found over the tropics. Natural variability is much lower in the tropics than at the poles, so even modest amounts of tropical warming are more likely to push into unprecedented territory when analyzed on a day-to-day basis.

The researchers also found that specific humidity increased at a faster pace in the tropics vs. higher latitudes, which agrees with the longstanding principle that water evaporates from oceans at an increasingly rapid rate as the climate warms.

“We have been saying for a while now that all weather is occurring in a new normal and thus being affected by climate change, but this paper quantifies it,” said Gerald Meehl, a senior scientist at the National Center for Atmospheric Research who was not involved in the study.

Knutti said he hopes the study will influence communication about climate change.

“Human perception is biased toward things that happen now,” he said, “and individual weather events influence how the threat of climate change is perceived.”

Knutti notes that the 2013 assessment from the Intergovernmental Panel on Climate Change found that humans were the dominant cause of long-term warming.

“We now demonstrate that since then we haven’t had a single day of ‘normal’ weather globally. Yesterday was climate change, today is climate change, and tomorrow will be as well. I think this is a powerful message.”

The Weather Company’s primary journalistic mission is to report on breaking weather news, the environment and the importance of science to our lives. This story does not necessarily represent the position of our parent company, IBM.

Some Tropical Mischief Possible Over the Atlantic This Weekend : The Alabama Weather Blog

Lori deserves better. So does America.