Home Weather First Day of the Season & TD3 Forms Over the Bay of... 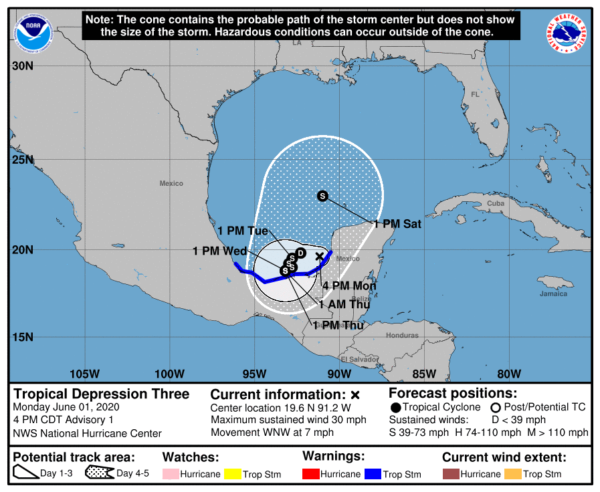 It is just the first day of the Atlantic Hurricane Season and we already have our third tropical depression in the Atlantic basin for 2020. Here is the latest from the National Hurricane Center: 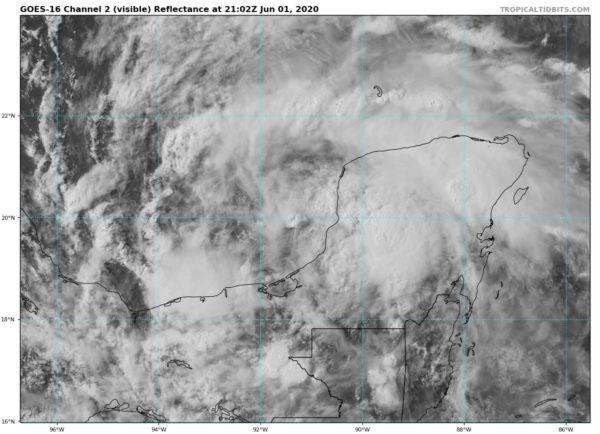 DISCUSSION AND OUTLOOK
At 400 PM CDT (2100 UTC), the center of Tropical Depression Three was located near latitude 19.6 North, longitude 91.2 West. The depression is moving toward the west-northwest near 7 mph (11 km/h). This motion at a slower forward speed is expected tonight. The depression is forecast to turn west-southwestward or southward at a slower forward speed on Tuesday and meander over the southern Bay of Campeche through late Wednesday. On the forecast track, the center of the cyclone is forecast to be near the coast of the southern Bay of Campeche Tuesday night through Thursday.

Maximum sustained winds are near 30 mph (45 km/h) with higher gusts. Gradual strengthening is expected during the next couple of days and the depression is forecast to become a tropical storm tonight or Tuesday.

KEY MESSAGES
1. The depression is expected to bring heavy rainfall to portions of southern Mexico, Guatemala, Honduras, and El Salvador, which could cause life-threatening flash flooding and mudslides.

2. Tropical storm conditions are expected along the coast of Mexico where a tropical storm warning is in effect.

3. The system is forecast to begin moving northward across the Gulf of Mexico later this week. However, it is too soon to specify the location and timing of any potential impacts along the U.S. Gulf Coast. Interests in these areas should monitor the progress of this system through the week and ensure they have their hurricane plan in place as we begin the season.

A Cold Start for the Summer Season

Unrelenting heat for the next week in Texas – Space City Weather

Add fruit, veggies and grains to diet to reduce type 2...

The pandemic-paved path to Election Day