TRENDING HOTTER: We will have scattered showers and thunderstorms around in the humid, tropical air over Alabama today and tomorrow, but they should be more scattered in nature as the air aloft becomes warmer, and stability values increase. Look for a partly sunny sky both days with a high close to 90 today, followed by low 90s tomorrow. Odds of any one spot getting wet today is 30/40 percent, and closer to 25 percent tomorrow.

THE ALABAMA WEEKEND: We are forecasting highs in the 92-95 degree range over the weekend with a partly to mostly sunny sky both days. Afternoon thunderstorms are possible, but they should be pretty isolated. We will also have to watch any organized thunderstorm areas that form over Missouri or Arkansas; those could roll into Alabama thanks to a northwest flow aloft. But, it is just about impossible to know in advance if, and when those form. Bottom line is that most of the weekend will be dry, and afternoons will be hot.

NEXT WEEK: The upper ridge over the Deep South will strengthen, meaning a very hot mid-summer week for Alabama. Partly to mostly sunny days with highs in the mid 90s. Afternoon and evening showers and thunderstorms are possible, but they should be pretty widely spaced. See the Weather Xtreme video for maps, graphics, and more details.

TROPICS: Surface observations along with satellite and radar data indicate that an area of low pressure located about 50 miles east of Wilmington, North Carolina, is gradually becoming better defined. The associated showers and thunderstorms are still disorganized, however, and are mostly confined to the east of the center. The low is expected to move northeastward or north-northeastward near or just offshore of the North Carolina Outer Banks later today and then along the mid-Atlantic coast tonight and Friday. Environmental conditions are expected to be conducive for development, and a tropical or subtropical cyclone will likely form later today or tonight.

Regardless of development, the system is expected to produce locally heavy rainfall that could cause some flash flooding across portions of eastern North Carolina, the coastal mid-Atlantic, and southern New England during the next few days. Gusty winds are also possible along the North Carolina Outer Banks today, and along the mid-Atlantic and southern New England coasts Friday and Saturday. 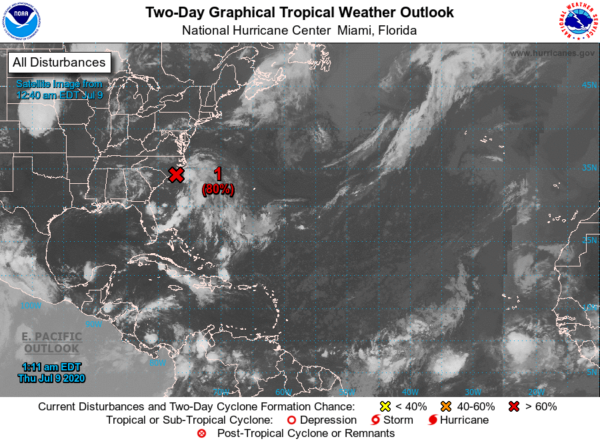 The rest of the Atlantic basin, including the Gulf of Mexico, is quiet.

ON THIS DATE IN 1979: Hurricane Bob was born in the Gulf of Mexico, becoming the first Atlantic Hurricane to be given a male name.