HAPPY BIRTHDAY AMERICA!!!: New day, same forecast as our 4th of July is pretty typical of early July in Alabama. It is hot, it is humid, and we are watching the radar as showers and storms will be popping up across the Alabama landscape through the afternoon and evening hours. 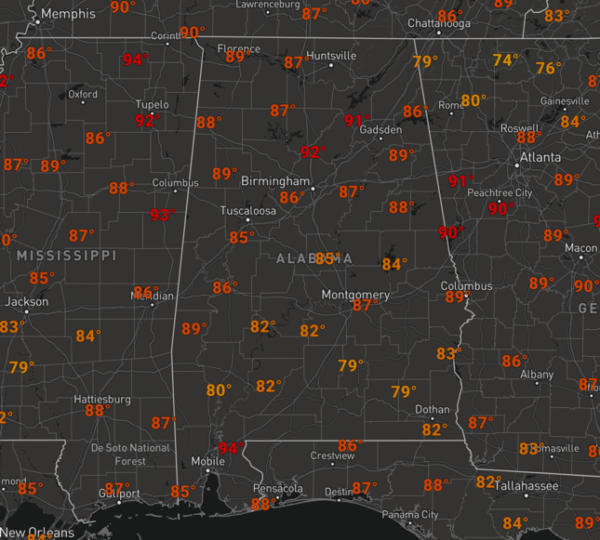 Temperatures are heading into the upper 80s and lower to mid 90s across Alabama this afternoon, but once again, we say it often, big HEAT, means big STORMS. Storms which develop today, will be tracking from east to west across the state again today, like we saw yesterday. Any storms will produce loads of lightning, intense rainfall, and strong, gusty winds. Also as we have seen in recent days, do not be surprised if some storms this afternoon reach severe limits briefly, with a damaging wind threat. 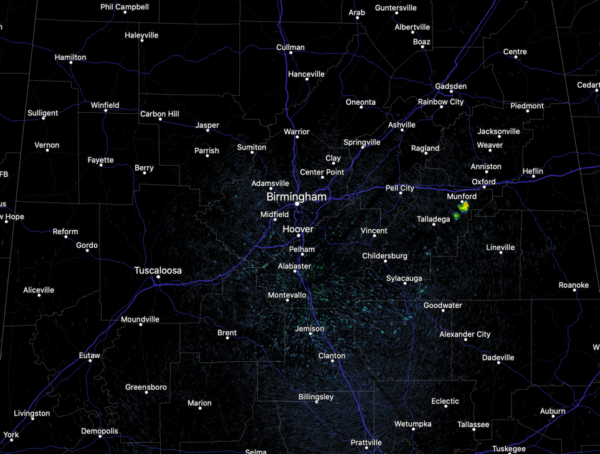 As we approach the midday hours, the radar is mostly quiet, but that will be changing soon, and we are starting to see a shower pop-up over northern Talladega County, near Munford. Again, no way of knowing when and where these will develop, just have to watch radar trends. Storms will continue into the evening hours, but should gradually wind down with the loss of daytime heating, and hopefully will not impact any fireworks shows still scheduled for this evening.

FOR TOMORROW: Not much change, we start off tomorrow mainly dry and in the 70s. Temperatures begin to climb fast, and once again should top out closer to 90 by the afternoon. Of course, more showers and storms will pop-up randomly tomorrow with most of them occurring during the afternoon and evening hours, and some of them will be strong…Another day of radar watching.

IN THE TROPICS: Surprise!!! We now have Tropical Depression #5…This will likely become Edouard later today… 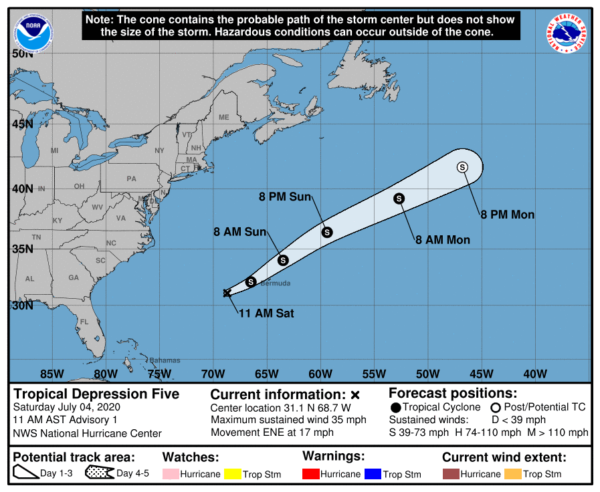 The center of Tropical Depression Five was located near latitude 31.1 North, longitude 68.7 West. The depression is moving toward the east-northeast near 17 mph. A faster east-northeastward motion is expected by tonight, followed by further acceleration on Sunday. On the forecast track, the center of the depression will move near or just northwest and north of Bermuda tonight and early Sunday. Maximum sustained winds are near 35 mph with higher gusts. Little overall change in strength is likely, however the system could become a tropical storm later today. The estimated minimum central pressure is 1009 mb (29.80 inches).

WORLD TEMPERATURE EXTREMES: Over the last 24 hours, the highest observation outside the U.S. was 119.7F at Nuwasib, Kuwait. The lowest observation was -83.2F at Kohnen, Antarctica.

WEATHER ON THIS DATE IN 1911: The northeastern U.S. experienced sweltering 100 degree heat. The temperature soared to 105 degrees at Vernon, VT, and North Bridgton ME, and to 106 degrees at Nashua NH, to establish all-time records for those three states. Afternoon highs of 104 at Boston, MA, 104 at Albany, NY, and 103 at Portland, ME, were all-time records for those three cities.