Home Weather Humidity Levels Slowly Rising For The Rest Of The Week : The...

SUNNY MONDAY: Temperatures are mostly in the mid-80s across Alabama this afternoon with a good supply of sunshine through a scattered field of cumulus clouds. There is nothing on radar, and tonight will be mostly fair.

We will introduce some risk of isolated showers tomorrow afternoon, but most of the state will stay dry with a partly sunny sky. Temperatures reach the upper 80s tomorrow.

REST OF THE WEEK: As humidity levels rise, we will have the potential for random, scattered showers and thunderstorms each day across Alabama Wednesday through Friday. No wash out, and the best chance of the showers will come during the afternoon and evening hours, mostly between 1:00 and 9:00 p.m. High will be in the mid to upper 80s with a mix of sun and clouds daily.

THE ALABAMA WEEKEND: We will keep a persistence forecast going. Partly sunny days, highs in the upper 80s, and the usual risk of “pop up” showers and thunderstorms, mainly during the peak of the daytime heating. Odds of any one spot getting wet both days are around 40 percent.

NEXT WEEK: With a tropical system expected to stay west of Alabama, we see no major need to vary from the standard early summer forecast. Partly sunny days, a few scattered showers or storms reach day, highs mostly in the upper 80s. Just what you expect in June in Alabama… See the Weather Xtreme video for maps, graphics, and more details.

TROPICS: We have a 90 percent chance of tropical development over the far Southwest Gulf of Mexico. Satellite imagery and radar observations from Mexico show that the area of disturbed weather centered near the west coast of the Yucatan peninsula is gradually becoming better organized. The disturbance will move west-northwestward over the Bay of Campeche later this afternoon where environmental conditions are expected to be conducive to support development, and a tropical depression or storm is likely to form tonight or Tuesday. The system is then forecast to drift westward or west-southwestward over the southern Bay of Campeche through the middle of the week. Interests along the coast of the Bay of Campeche should monitor the progress of this disturbance as tropical storm watches or warnings could be required for a portion of this area later today or tonight.

The name will be “Cristobal”, and long-range ensemble data from models suggest the highest impact potential will come over the Texas or Louisiana coast in 6-7 days. Of course, until the system gets organized and we get data from hurricane hunter aircraft, there is no way of knowing exactly the final landfall point or the intensity. 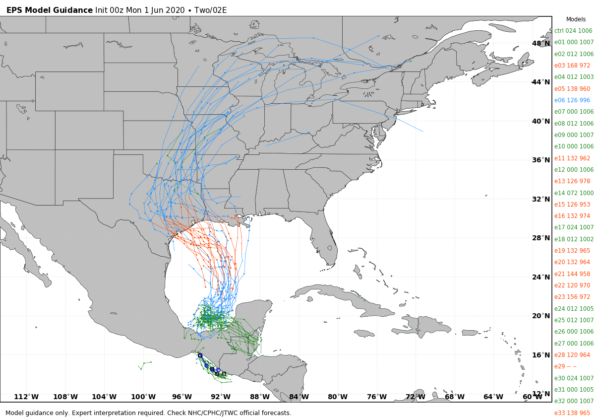 THE ALABAMA/NORTHWEST FLORIDA GULF COAST: While the core impact of Cristobal will be well to the west, the Central Gulf Coast will be on the onshore flow side (east side) of the circulation. This means deeper moisture will likely impact places like Gulf Shores, Destin, and Panama City Beach later this week and into the weekend with higher than the usual potential for showers and thunderstorms. But, this doesn’t mean a “wash out”, and I would expect to see some sun at times. If I had a vacation trip planned, I would not change anything.

Look for the next Weather Xtreme video here by 7:00 a.m. tomorrow…

How U.S. can win the Cold War with China