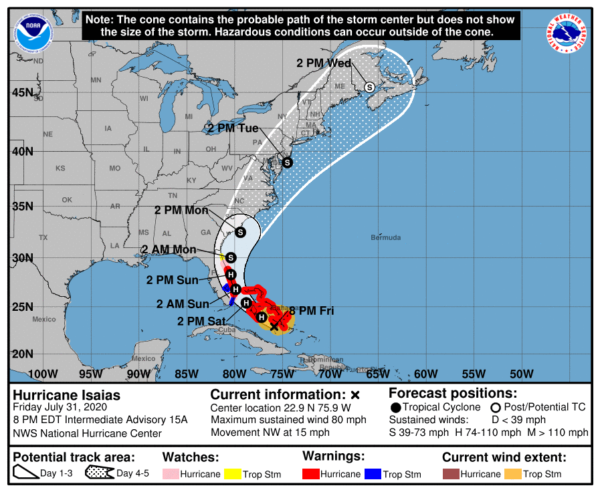 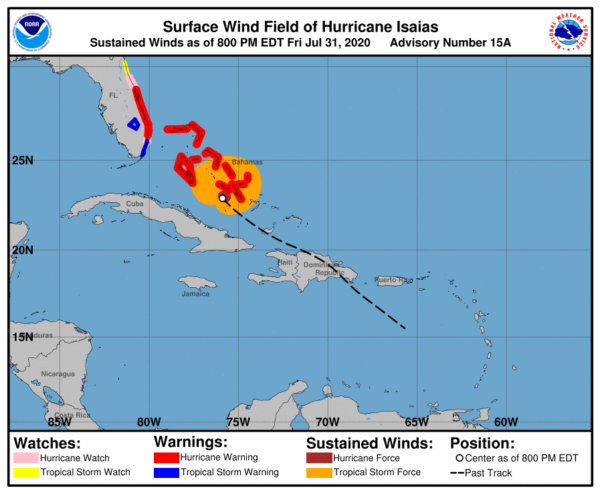 Interests elsewhere along the southeast coast of the United States should monitor the progress of Isaias. Additional watches or warnings may be required later tonight and Saturday.

At 800 PM EDT (0000 UTC), the center of Hurricane Isaias was located by Air Force and NOAA Hurricane Hunter aircraft near latitude 22.9 North, longitude 75.9 West. Isaias is moving toward the northwest near 15 mph (24 km/h), and a general northwestward motion with some decrease in forward speed is expected for the next day or so, followed by a turn toward the north-northwest by late Sunday. On the forecast track, the center of Isaias will move near or over the Central Bahamas tonight, near or over the Northwestern Bahamas Saturday and near the east coast of the Florida peninsula Saturday afternoon through Sunday.

Maximum sustained winds are near 80 mph (130 km/h) with higher gusts. Additional strengthening is expected later tonight and early Saturday, and Isaias is forecast to remain a hurricane for the next couple of days.

STORM SURGE: The combination of a dangerous storm surge and the tide will cause normally dry areas near the coast to be flooded by rising waters moving inland from the shoreline. The water could reach the following heights above ground somewhere in the indicated areas if the peak surge occurs at the time of high tide… 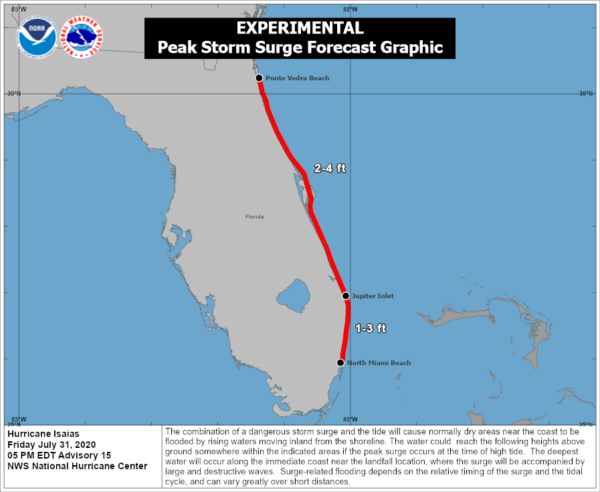 The deepest water will occur along the immediate coast near and to the right of the center, where the surge will be accompanied by large waves. Surge-related flooding depends on the relative timing of the surge and the tidal cycle and can vary greatly over short distances. For information specific to your area, please see products issued by your local National Weather Service forecast office.

A dangerous storm surge will raise water levels by as much as 3 to 5 feet above normal tide levels in areas of onshore winds in the Bahamas.

WIND: Hurricane conditions will continue to spread northwestward into the central and northwestern Bahamas tonight and Saturday. 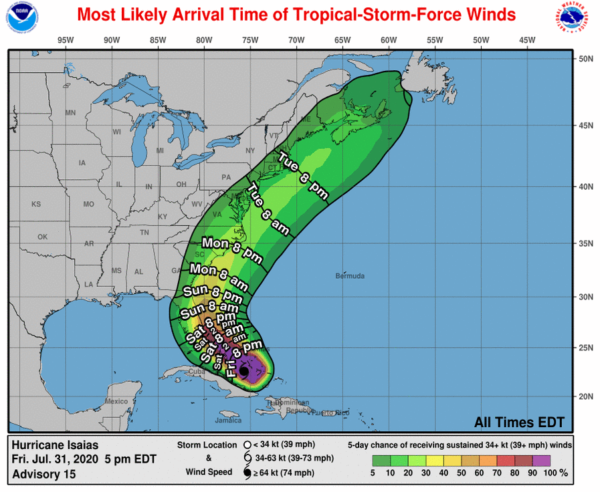 Hurricane conditions are expected to reach the coast within the hurricane warning area in Florida late Saturday and Saturday night. Winds are expected to first reach tropical storm strength on Saturday, making outside preparations difficult or dangerous. Preparations to protect life and property should be rushed to completion.

RAINFALL: Isaias is expected to produce the following rain accumulations:

Bahamas, Turks and Caicos: 4 to 8 inches.

Cuba: 1 to 2 inches, with isolated maximum totals of 4 inches.

These rainfall amounts could lead to life-threatening flash and urban flooding, especially in low-lying and poorly drained areas.

From Friday night through Tuesday:

South Florida into east-Central Florida: 2 to 4 inches, with isolated maximum totals of 6 inches.

Carolinas into the mid-Atlantic, including the southern and central Appalachians: 2 to 4 inches, with isolated maximum totals of 6 inches. 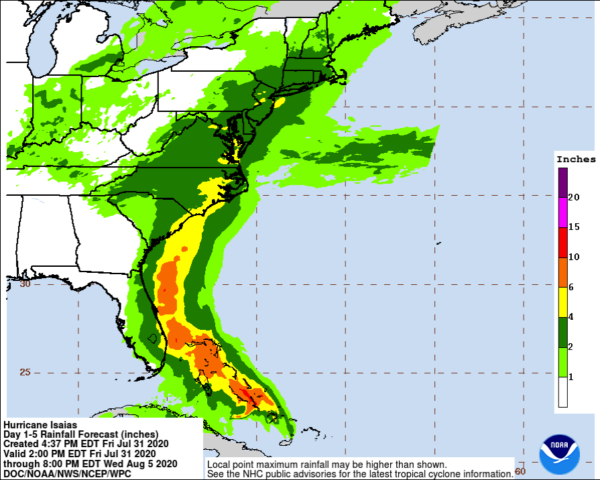 Heavy rainfall from Isaias could result in isolated flash and urban flooding, especially in low-lying and poorly drained areas. Isolated minor river flooding is possible across the eastern Carolinas and into Virginia.

SURF: Swells generated by Isaias are affecting portions of Hispaniola, eastern Cuba, the Turks and Caicos, and the southeastern and central Bahamas. These swells will spread along the east coast of Florida and the southeastern United States coast on Saturday. These swells are likely to cause life-threatening surf and rip current conditions. Please consult products from your local weather office.

What Happened In Portland Shows Just How Fragile Our Democracy Is