It is certainly summertime in Alabama and the weather pattern looks very typical for late June and early July. We are in a very humid, tropical air mass and each day this week we will see a partly sunny sky, hot and humid conditions, which will more than aide in the development of afternoon and evening showers and thunderstorms.

As we approach the midday hour, the radar is starting to get active, with scattered, random showers and storms popping up across the Alabama landscape. These are producing heavy rainfall and frequent lightning. 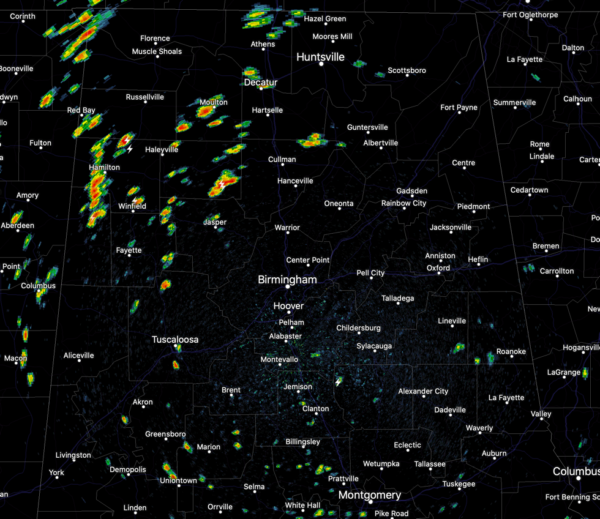 Of course, with so much instability, stronger storms thunderstorms will be capable of producing strong gusty winds each day, and a few severe thunderstorm warnings will be possible each day as well.

If you have something planned outdoors any day this week, just keep a close eye on radar, and always go indoors when thunder roars! Temperatures will be right at seasonal averages this week, with highs around 90, and lows in the low to mid 70s.

TROPICS: A couple of areas of interest, but nothing of too much concern right now. 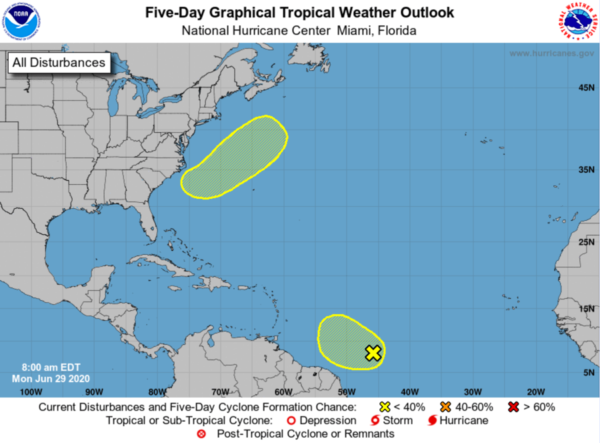 1. Disorganized showers and thunderstorms located several hundred miles east of the southern Windward Islands are associated with a tropical wave. Some slight development of this system is possible during the next day or so while it moves westward to west-northwestward at around 20 mph. Strong upper-level winds are forecast to inhibit further development by mid-week. Formation chance through 5 days…low…10 percent.

The rest of the Atlantic basin is quiet.

WORLD TEMPERATURE EXTREMES: Over the last 24 hours, the highest observation outside the U.S. was 122.0F at Hassakah, Syria. The lowest observation was -95.1F at Concordia, Antarctica.

WEATHER ON THIS DATE IN 1954: Hurricane Alice dumped as much as 27 inches of rain on the Lower Rio Grande Valley of Texas. The Rio Grande River at Laredo reached a level 12.6 feet above its previous highest mark, and the roadway of the U.S. 90 bridge was thirty feet below the high water.

Hot Humid Days; Not Many Showers : The Alabama Weather Blog

7:00 AM | *Another moderately warm day for mid-July and continued rain-free* — Perspecta Weather

Bio Bidets are nearly 50% off for one day at Woot!

Politics Podcast: COVID-19 Deaths Are Rising. What Will The U.S. Do?