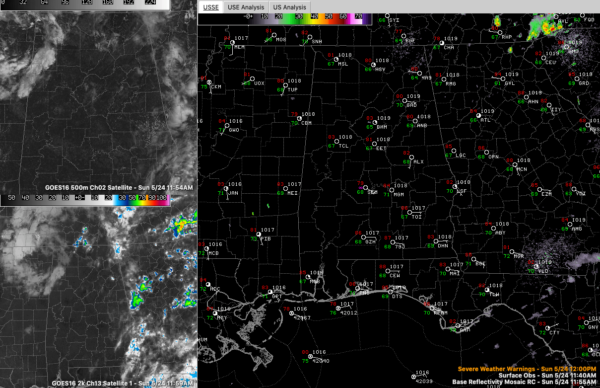 Skies are mostly sunny across Alabama on this Sunday afternoon. Some low clouds are hanging around Northwest Alabama’s Lamar, Marion, and Franklin counties into the Shoals area.

Temperatures are warming through the 80s now, heading for highs in the upper 80s to near 90F.

The airmass across Alabama is more stable today than that of yesterday and Friday, so showers and storms should be less widespread it appears. But still, scattered showers and storms will form later this afternoon. That may occur mainly from Atlanta down to Auburn to Montgomery and into South Alabama. These storms would move northwestward before dissipating early this evening.

The ones that do manage to develop with feature brief heavy rain, lightning, and gusty winds. Small hail with a stronger storm is not out of the question.

Monday looks drier again, with only widely scattered showers and storms. A few more clouds may keep things a degree or two cooler. Moisture levels look like they will rise on Tuesday, leading to increased clouds, higher rain/storm chances and cooler temperatures with highs near 80F. Enhanced ani chances will be with us through Saturday. A front may lower rain chances by Sunday and beyond.

Keeping an eye on the western Caribbean and southern Gulf for the June 1-8 period. There could be a little tropical mischief about that time. It looks like a tropical storm might form in this region and could move toward the Florida Peninsula in the Tampa Bay region around June 7-8. Not a forecast at this time, just an interesting possibility to keep an eye on.