Home Weather Only A Few Showers Out There At Midday : The Alabama Weather...

WHAT’S UP WITH THE WEATHER AT MIDDAY 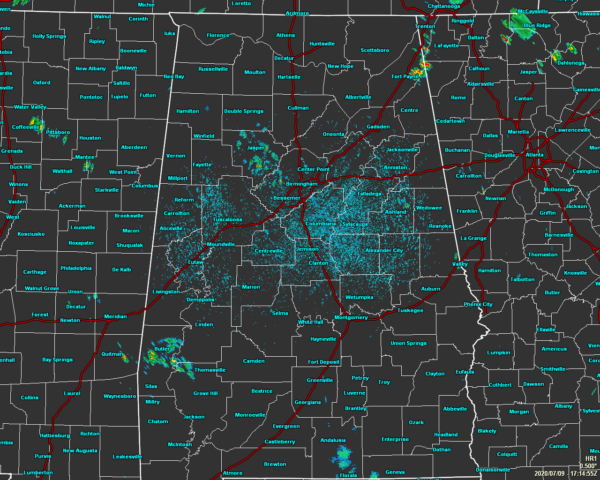 As of 12:20 pm, we only have a few isolated showers showing up on radar mainly over Walker County and the western parts of Jefferson County. Other than a few showers in the southwestern and northeastern parts of the state, the radar is rather quiet at this time. Temperatures as of the 12:00 pm Round-Up were in the lower to mid-80s across the area. Birmingham was at 84 degrees. Anniston, Montgomery, and Troy were tied as the warm spots at 85 degrees. Alexander City, Haleyville, and Calera were tied at 81 degrees as the cool spots.

Skies will continue to be mostly cloudy throughout the rest of the afternoon and into the early evening and we’ll see more scattered showers and thunderstorms develop with the heating of the day. The greater rain chances will be over the southwestern portions of the area, but all of Central Alabama will have a decent chance of rain. Afternoon highs will be in the upper 80s to the lower 90s. Any shower activity should diminish rather quickly after sunset, but don’t be surprised if one or two linger around just a tad longer into the late-night hours. Lows will be in the lower to mid-70s.

WE MAY SEE A TROPICAL/SUBTROPICAL DEPRESSION LATER TODAY 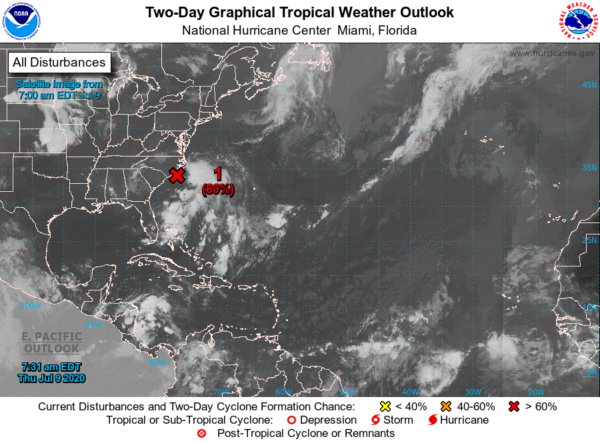 The Gulf of Mexico and the Caribbean Sea are free from any tropical disturbances and there is no threat to the Gulf Coast.

Shower and thunderstorm activity has increased overnight in association with an area of low pressure located about 60 miles east of Wilmington, North Carolina. The thunderstorm activity is currently located well east and northeast of the low’s center, but only a small increase in organization or a reformation of the center closer to the thunderstorm activity could result in the formation of a tropical or subtropical cyclone later today or tonight. The low is expected to move northeastward or north-northeastward near or just offshore of the North Carolina Outer Banks later today and then along the mid-Atlantic coast tonight through Friday night.

Regardless of development, the system is expected to produce locally heavy rainfall that could cause some flash flooding across portions of eastern North Carolina, the coastal mid-Atlantic, and southern New England during the next few days. Gusty winds are also possible along the North Carolina Outer Banks today, and along the mid-Atlantic and southern New England coasts Friday and Saturday.

7:00 AM | ***Additional showers and thunderstorms for the region and some can be heavy at times…weekend looking decent*** — Perspecta Weather

How to Write an Imperfect Black Woman

Fairly typical August weather for Houston straight into next week –...