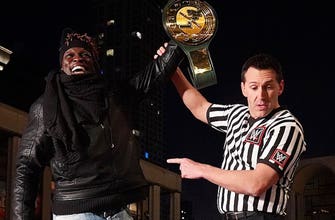 The 24/7 Championship is never safe — not even in New York City’s Times Square on New Year’s Eve.

Mojo Rawley seemed to be in friendly spirits when he surprised R-Truth during an interview with longtime WWE friend Maria Menounos on “FOX’s New Year’s Eve with Steve Harvey: Live from Times Square.”

But Menounos revealed she was wearing a WWE referee’s uniform, and before R-Truth knew it, Rawley had rolled him up to become 24/7 Champion for the first time.

Rawley’s reign didn’t last long, though — thanks to a little help from WWE’s resident musician.

On the scene in Times Square was Elias, who blasted Rawley with his guitar as he tried to find an escape route, allowing R-Truth to swoop in and reclaim the 24/7 Title live on FOX.

Watch the second part of FOX’s New Year’s Eve beginning live at 11 p.m. for the countdown to the iconic ball drop!

Illinois governor on Trump's response to protests: 'He's been a miserable...

Spike Lee on what’s different about these protests