SUMMERTIME WEATHER: The weather pattern looks very typical for late June and early July in Alabama this week. The main jet stream will remain well to the north of the state, and we are in a very humid, tropical airmass. Each day this week we expect a partly sunny sky, and as the summer heat develops during the day, the air becomes buoyant by afternoon, opening the door for showers and thunderstorms to develop.

These showers and storms tend to form in scattered, random locations, and most of them are between the hours of 1:00 and 9:00 p.m. Most days this week the odds of any one spot getting wet will be in the 30/40 percent range, and the heavier thunderstorms will be capable of producing strong gusty winds. SPC has much of North Alabama in a “marginal risk” (level 1/5) on Wednesday. 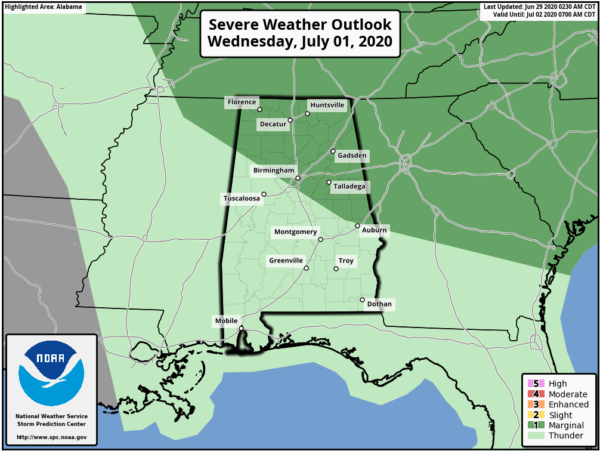 Day to day changes in the placement and coverage of scattered showers and storms are determined by small scale weather features that are very hard to identity in advance. If you have something planned outdoors, just keep a close eye on radar, and always go indoors when thunder roars! Temperatures will be right at seasonal averages this week, with highs around 90, and lows in the low to mid 70s.

NEXT WEEK: And, the pattern rolls along. Pretty much a persistence forecast with hot, muggy days with “scattered, mostly afternoon and evening storms” remaining in the forecast. Highs will be around 90… See the Weather Xtreme video for maps, graphics, and more details.

TROPICS: Shower and thunderstorm activity associated with a tropical wave located over the central tropical Atlantic has increased during the past few hours. Some slight development of the wave is possible during the next day or so while it moves westward to west-northwestward at around 20 mph. Strong upper-level winds are forecast to inhibit further development by mid-week.

ON THIS DATE IN 1998: “The Corn Belt Derecho of 1998” in the following states NE, IA, IL, IN, KY. A derecho which originated in far southeast South Dakota moved across Illinois during the afternoon and evening and continued as far east as Ohio the next morning. Every county in central Illinois sustained some damage, as these severe thunderstorms passed. Winds gusted in the 60 to 80 mph range, with some localized microbursts producing winds more than 100 mph. Significant damage occurred in the microburst areas, including the towns of Morton, McLean, LeRoy, and Tolono. In Tolono, 22 cars of a southbound 101-car Illinois Central freight train were blown off the tracks. It was unknown how many vehicles were picked up by the wind, but 16 cars were turned over, and another six derailed but remained upright. The train was en route to Centralia from Chicago with a load of mixed freight, including plastic pellets and meal. The freight cars empty weighed about 60,000 pounds, while a full one weighs about 260,000 pounds. Overall, 12 people were injured, and damage was estimated at around $16 million.

Hot Humid Days; Not Many Showers : The Alabama Weather Blog

Roger Stone Can Be Tried, Again

Spotify rolls out podcast charts to make it easier to find...

No, Texas is not a swing state — yet