We will get a little break from the heat over the next few days as showers and thunderstorm chances will be elevated a bit. But those temperatures will be inching back up toward the end of the week, and the weekend looks really hot.

LOOKING BACK TO YESTERDAY: Saturday was a hot and humid day across Alabama with scattered strong storms across the northern third of the state. High temperatures across Central Alabama ranged from 91F at Anniston, to 92F at Montgomery, Calera, and Tuscaloosa, and 93F at Birmingham. 2.65 inches of rain was measured at a home weather station in Nance’s Creek in Calhoun County during one of those afternoon storms.

MAP WALL: On the weather maps this morning, we have an upper-level ridge over the middle of the country, bookended by troughs on both the West and East Coasts. A couple of weak upper lows are over the Gulf of Mexico. At the surface, pressures are fairly low across much of the eastern half of the United States, with one weak surface low over North Texas and another over the Dakotas. That upper-level weakness will grow over Alabama and the Southeast in coming days, and with lots and lots of moisture will be trapped underneath that ridge, and with the hearing of the day each day, we will see fairly numerous shower and thunderstorm chances into Midweek. A large upper-level ridge will begin to build over the Southwest United States late in the week, and we will be on the eastern periphery of the stifling high-pressure regime. That will allow for drier conditions to set in again over Alabama. With fewer showers and storms, we will see temperatures warming well back into the 90s again. Welcome to summer in Alabama. 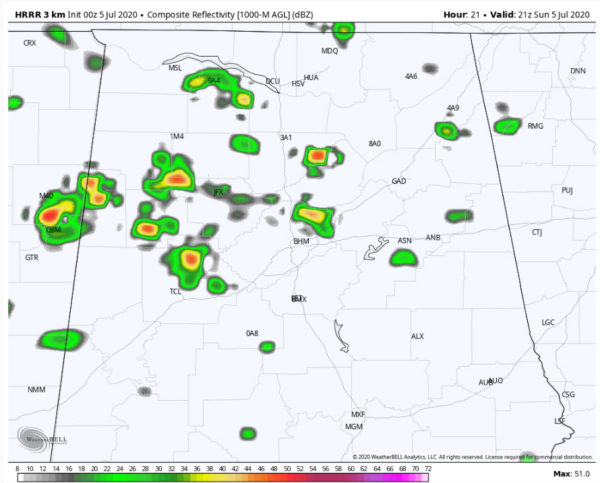 FOR YOUR SUNDAY: Today will look a lot like yesterday, with scattered showers and storms developing mainly across the northern third of Alabama again as aa shot of drier air in the mid-levels of the atmosphere moves into Central Alabama from the east. High temperatures will range between the upper 80s across the Tennessee Valley to lower 90s across the rest of Central Alabama. The showers and storms will diminish after sunset as we lose the heating of the day. Overnight lows will be in the lower 70s areawide.

MONDAY THROUGH MIDWEEK: By Monday, a large mass of moisture will slide northward out of the Gulf of Mexico into Alabama, and precipitable waters will be well above normal for this time of year, reaching as high as 2.5 inches. This will lead to high chances of showers and storms mainly during the afternoon and evening hours. High temperatures will back off just a bit, lowering into the middle and upper 80s generally. Some spots beset with more clouds and showers will remain in the lower 80s for highs. Quite nice for July in Alabama.

RAINFALL AMOUNTS: Don’t get too excited about those high rain chances translating into high average precipitation amounts. It won’t happen unless you are lucky enough to get under one of the bigger storms. When those floodgates open up, you could see 1-2 inches of rain fairly quickly, and most everyone will see some rain between now and Wednesday night, but many places will be disappointed with less than a quarter of an inch.

DROUGHTWATCH: The good news is that we are faring pretty well for now in the drought department. There are scattered areas categorized as abnormally dry by the Drought Monitor, but no areas of organized drought in Alabama. Dr. John Christy’s Lawn and Garden Index does show that areas of Shelby County down into northern Chilton could use some showers on their cucumbers. Northwest Alabama is in rally good shape right now.

THURSDAY INTO THE WEEKEND: A big typical summer heat ridge will set up over the Plains state by midweek and this ridge will send its eastern tentacles over Alabama into the weekend. It will flatten out and spread its influence through the Ohio Valley and into the Mid-Atlantic by early next week, expanding summer’s heat to those areas. We will be much hotter, with temperatures by the weekend well into the 90s. Some areas in Alabama will be flirting with excessive heat as heat indices exceed 100F each day and approach the advisory criteria level of 105F.

TOWARD THE END OF THE MODEL OUTPUT: You know it as “voodoo territory” in these parts. The ridge eventually weakens and we return to higher than normal rain chances by mid-month. Temperatures will go back to normal, with highs each day in the lower 90s and lows in the 70s. Just your typical hot and humid summertime weather in Alabama. We will be watching some fairly strong tropical waves moving across the Atlantic between Africa and the islands by then.

TROPICS: Tropical Depression Number Five passed neared the beautiful island of Bermuda last night. Top winds are still 35 mph this morning, and that is about where is expected to remain for the next 48 hours or so before it becomes post-tropical. There is a chance it could become a tropical storm at some point today. If it does, it will be called Edouard. The storm will remain well out over the open Atlantic, accelerating to the northeast. Elsewhere, the NHC isn’t expecting tropical development over the Atlantic during the next five days, but don’t be shocked if there are a couple of potential surprises in Gulf and Western Atlantic in the coming week.

The eastern Pacific is active, with a couple of disturbances of note. The second disturbance has a high chance of becoming a tropical cyclone of the next five days. It will dissipate by the time it reaches the latitude of Southern California.

BEACHCAST: Fairly high chances of rain and thunderstorms will be a feature along the beautiful beaches of Alabama and Northwest Florida into midweek. Rain chances should diminish late in the week and into the weekend. High temperatures will be in the middle 80s through Wednesday and back up near 90 by Saturday. Lows will be fairly uniform, in the middle and upper 70s. Water temperatures are warm, in the lower 80s. Rip currents will be on the increase, especially by Monday, with the storms around. Surf will be running around 2 feet.

NATIONALLY: Heat is the story nationally and that will be the case through the week ahead. Heat will dominate across the Desert Southwest, The Plains and Midwest, Florida and the Gulf Coast, and even the Great Lakes and Northeast. Heavy rains will be an issue across the Northern Plains, Upper Midwest, as well as Florida and the Carolinas. High surf will be an issue along the beaches of Southern California, with large breaking waves of 8-11 feet and dangerous rip currents through Monday. Severe drought continues to be a big problem out west.

WEATHERBRAINS: This week, the panel will entertain Jeff Garmon, the Chief of the NWS in Juneau in Alaska. We will also have a special few minutes with Jimmy Hall, the lead vocalist of the famous band Wet Willie. He will talk about his top ten hit “Keep on Smillin’”, something we all need to remember right now. Check out the show at www.WeatherBrains.com. You can also subscribe on iTunes. You can watch the show live at live.bigbrainsmedia.com or on James’ YouTube Channel You will be able to see the show on the James Spann 24×7 weather channel on cable or directly over the air on the dot 2 feed.

ON THIS DATE IN 1916: A very destructive early-season hurricane struck the Mobile and Pensacola area. Seven deaths resulted from the Category 3 storm. Winds reached 82 mph and tides were 11.6 feet above normal at Mobile. The Mobile Register reported that a three-masted ship floated down Government Street in Mobile, coming to rest on Broadway. The barometric pressure at Fort Morgan AL measured at 28.38 inches. Follow my weather history tweets on Twitter. I am @wxhistorian at Twitter.com.

Reading Satellite Images – What the Clouds are Telling You