WET PATTERN DEVELOPS: On the maps this morning, there is a large scale upper trough west of the state, moving in our direction. The upward motion associated with the trough, along with increased tropical moisture, will set the stage for unsettled weather for Alabama today, and through the rest of the week. The sky will be generally cloudy each day, and we will forecast occasional showers and thunderstorms. The rain won’t be continuous, of course, but the pattern suggests the potential for beneficial rain through Friday.

Rain distribution won’t be very even, but most communities should see at least one inch of rain; a few spots could see two inches. Organized severe storms are not expected, although we note SPC has parts of North and East Alabama in a low end, “marginal risk” (level 1/5) of severe thunderstorms Thursday. 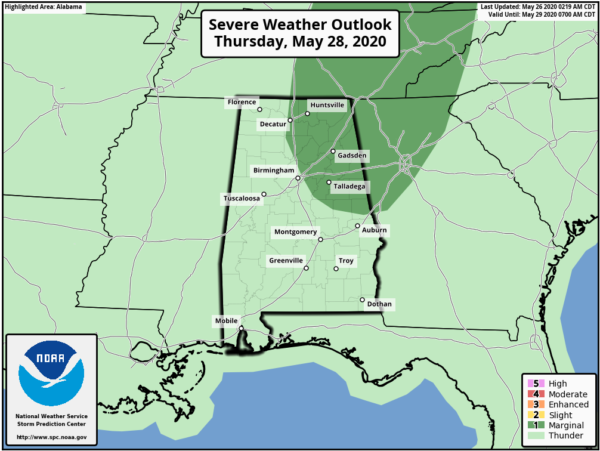 Small hail and gusty winds are likely with the heavier thunderstorms, and of course all storms in late May can produce a large amount of lightning. Heat levels will be down due to the clouds and rain; many places across North/Central Alabama will hold in the 70s today and tomorrow… then we project highs in the low 80s Thursday and Friday.

THE ALABAMA WEEKEND: The best chance of showers will shift into the southern half of the state Saturday as an unusually dry airmass for the end of May creeps into the northern counties. Then, a refreshing airmass arrives Sunday with sunshine in full supply, lower humidity, and pleasant temperatures. Cooler spots will drop into the 50s early Sunday morning, followed by a high close to 80 degrees.

NEXT WEEK: Dry weather continues through much of the week with slowly rising heat and humidity levels. A few showers could return late in the week Friday… See the Weather Xtreme video for maps, graphics, and more details.

TROPICS: A disturbance over the Florida Peninsula continues to produce heavy rain over the East Coast of the state; NHC gives it only a 20 percent chance of tropical development in the coming days due to strong winds aloft. Regardless of development, heavy rainfall could cause flash flooding over portions of southern and central Florida tonight, spreading northward to coastal sections of northeastern Florida, Georgia, and the Carolinas on Tuesday and Wednesday. Gusty winds could also produce rough marine conditions and life-threatening surf and rip currents along the coasts of eastern Florida, Georgia, and the Carolinas through tomorrow.

ON THIS DATE IN 1917: A major tornadic thunderstorm took a 293-mile track across parts of central Illinois and Indiana. Once believed to be a single tornado, the later study indicated it was likely at least eight separate tornadoes. Overall, 101 people in Illinois were killed during the tornado outbreak, with 638 injured.

Coronavirus: If the United States were my patient

The Young People Living With Parents in the Pandemic

Black and Brown Critique Is a Gift. Will White Abortion Advocates...