There is really not much change in the daily forecast throughout this forecast period as your Fourth of July will be hot and humid with scattered showers and thunderstorms mainly during the afternoon and evening hours. A few storms may become strong with gusty winds and we may see one become briefly severe with isolated damaging wind gusts up to 60 MPH. Highs will be in the upper 80s to the lower 90s.

Nearly the same story for your Sunday with the only difference being that scattered to numerous showers and thunderstorms will become likely during the afternoon and evening hours. Highs will be in the upper 80s to the lower 90s.

The Work Week Ahead

A weak upper level low will add just enough lift to make rain and thunderstorms likely for a few days and Monday will be the first of those days. Scattered to numerous showers and thunderstorms will be likely mainly during the afternoon and evening hours, but rain could occur at any time. Highs will be in the lower to mid-80s.

Really not much change for Tuesday… scattered to numerous showers and storms will remain likely mainly during the afternoon and evening hours, but rain could occur at any time. Highs will top out in the lower to mid-80s for most of Central Alabama.

It’s the same story on a different day for your Wednesday… scattered to numerous showers and thunderstorms could happen at any time, but most will take place during the afternoon and evening hours. Highs will be in the lower to mid-80s.

That upper low may begin to lift to the northeast and high pressure will begin to build across the area. At this point, it will only decrease the rain chances from likely to a decent chance on Thursday. Scattered showers and thunderstorms will be possible mainly during the afternoon and evening hours with chances maxing out around 50/50. Highs will be in the 80s across the area.

As the high continues to build, rain chances will drop slightly again but it will allow heat levels to start to rise again. Scattered showers and thunderstorms will become possible during the afternoon and evening hours. Highs will be in the mid to upper 80s with a couple of locations possibly reaching right at or just above 90 degrees. 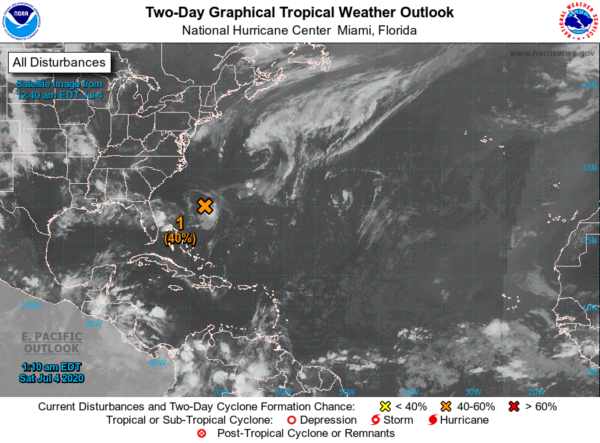 While the Gulf of Mexico and the Caribbean Sea remains rather quiet at this point, the Atlantic has a low to the west-southwest of Bermuda that started to get its act together on Friday and it is possible that a tropical depression could form on the Fourth of July. While it moves east-northeastward, conditions will become unfavorable for any further development on Sunday and after. The National Hurricane Center is giving it a 40% chance of forming into a depression within the next 48 hours.

On This Date in Weather History

Get the latest weather and rip current forecasts for the beaches from Bay St. Louis, MS, to Panama City Beach, FL, on our Beach Forecast Center page. There, you can select the forecast of the region that you are interested in.

Advertise On The Blog!

We had another fantastic year in 2019 with just over 17 million page views! That brings our total for the last 2 years close to 37 million page views! Don’t miss out! We can customize a creative, flexible, and affordable package that will suit your organization’s needs. Contact Bill Murray at (205) 687-0782.

Connect With The Blog On Social Media

This training bundle can get you ready for a career in...

Rivals suspect Racing Point ruling is just the tip of the...