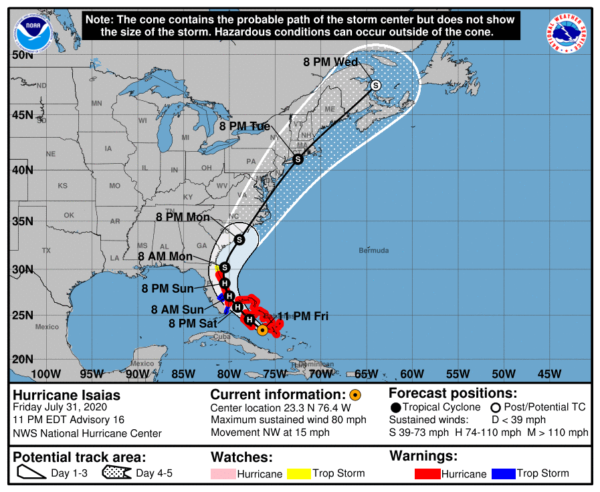 STARTING OFF WITH THE TROPICS

As of the 10:00 pm Friday night update from the National Hurricane Center, Hurricane Isaias had maximum sustained winds at 80 MPH and was moving to the northwest at 15 MPH. The pressure was down to 987 MB. It was located about 135 miles to the south-southeast of Nassau, Bahamas.

A general northwestward motion with some decrease in forward speed is expected for the next day or so, followed by a turn toward the north-northwest by late Sunday. On the forecast track, the center of Isaias will move near or over the Northwestern Bahamas Saturday and near the east coast of the Florida peninsula Saturday afternoon through Sunday. 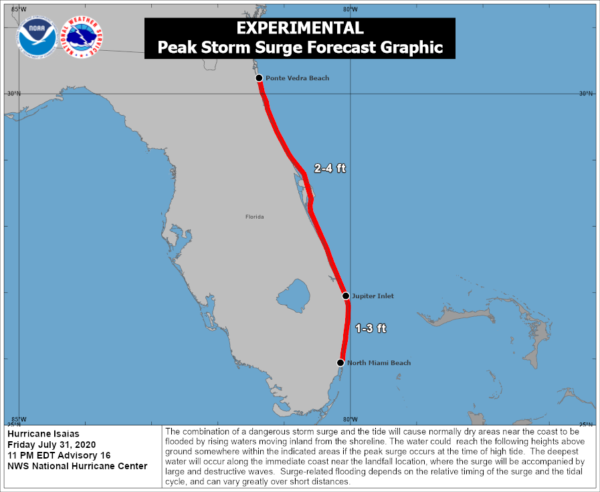 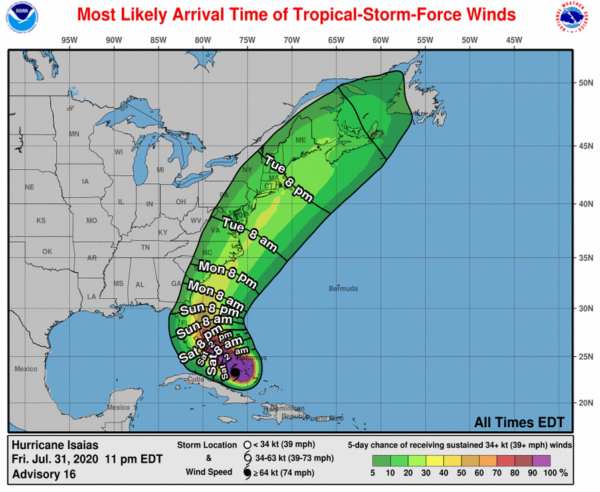 Hurricane conditions are expected to reach the coast within the hurricane warning area in Florida late Saturday and Saturday night and will spread northward through Sunday. 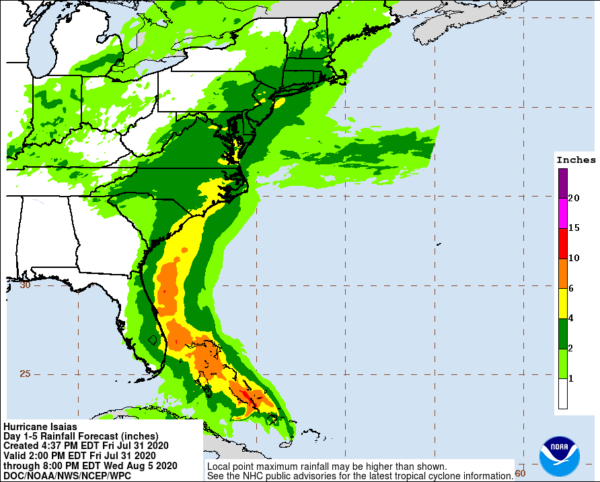 Flash flooding, urban flooding, minor river flooding will be possible across the eastern Carolinas and into Virginia.

Rough surf and life-threatening rip currents will spread along the east coast of Florida and the southeastern US coast on Saturday. 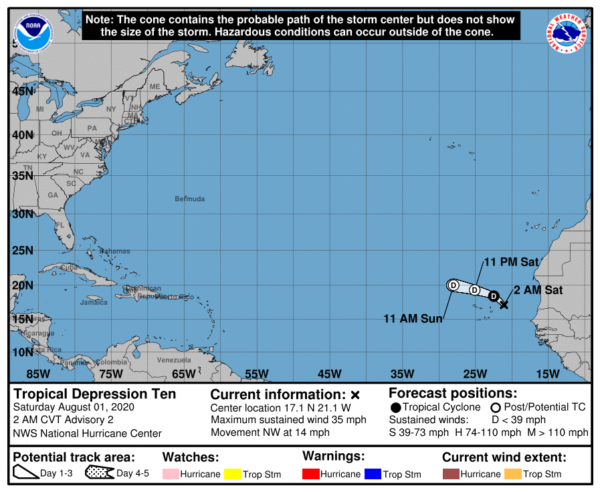 We also have Tropical Depression Ten out around 205 miles to the east-northeast of the Cabo Verde Islands and was moving to the northwest at 14 MPH. A turn toward the west-northwest or west is expected by Saturday afternoon and may briefly strengthen just enough to become a tropical storm. TD-10 is forecast to weaken and become a remnant low within the next 24 hours. Don’t blink… or you will miss it. The J-name is Josephine if it does strengthen enough to gain a name. 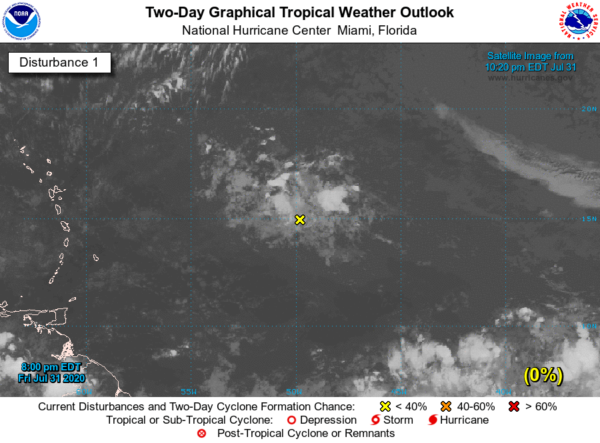 We also have a disturbance that is centered about 700 miles east of the Lesser Antilles. There is a small possibility of some slow development over the next few days, but this one will recurve back out to the north and away from any land. Nothing is going on in the Gulf of Mexico at this point.

WHAT’S UP WITH THE WEEKEND WEATHER?

We’ll have a cold front beginning to push its way across Central Alabama throughout the day on Saturday, but it will struggle to make some progress as it will only make it just past the I-65 corridor by the end of the evening. We’ll have a few showers possible during the morning hours, but scattered showers and storms will develop with the heating of the day along and ahead of the front. Widespread severe weather is not expected, but a few storms may become strong with gusty winds and small hail. Highs will be in the mid-80s to the lower 90s across the area from northwest to southeast.

The cold front will finally make its way through the rest of Central Alabama on Sunday, but before it leaves a few scattered showers and storms will be possible along and ahead of it, especially over extreme eastern and southeastern parts of the area. The rest of the area looks to stay dry with highs in the mid-80s to the lower 90s.

HOW ABOUT THE WORKWEEK AHEAD?

We’ll have another cold front start to approach Central Alabama from the west and northwest on Monday and will actually move into the northern half of the area late in the day. While we do not expect much in the way with showers and storms with this front, we will have a very small chance of an isolated shower or two during the afternoon and evening hours. Highs will be in the upper 80s to the lower 90s.

The cold front will start off over the I-20 corridor on Tuesday morning and will move southward through the rest of the area throughout the day. While a brief isolated shower or two may be possible, it looks like it will be another mainly dry day. Highs will be in the mid-80s to the lower 90s.

The front will be along the Gulf Coast on Wednesday which will give us another mainly dry day across Central Alabama, with only a very small chance of an isolated shower during the afternoon. Highs will be in the mid-80s to the lower 90s.

We look to stay dry to end out the first workweek of August. We’ll have plenty of sunshine and a little lower humidity on both days. Thursday and Friday’s highs will be up in the upper 80s to the mid-90s across the area.

ON THIS DATE IN WEATHER HISTORY

1989 – Hurricane Chantal made landfall along the Upper Texas coast about sunrise. Chantal deluged parts of Galveston Island and southeastern Texas with 8 to 12 inches of rain. Unofficial totals ranged up to twenty inches. Winds gusted to 82 mph at Galveston and reached 76 mph in the Houston area. Tides were 5 to 7 feet high. The hurricane claimed two lives and caused 100 million dollars damage.

Get the latest weather and rip current forecasts for the beaches from Bay St. Louis, MS, to Panama City Beach, FL, on our Beach Forecast Center page. There, you can select the forecast of the region that you are interested in.

ADVERTISE ON THE BLOG!

We had another fantastic year in 2019 with just over 17 million page views! That brings our total for the last 2 years close to 37 million page views! Don’t miss out! We can customize a creative, flexible, and affordable package that will suit your organization’s needs. Contact Bill Murray at (205) 687-0782.

CONNECT WITH THE BLOG ON SOCIAL MEDIA

There are several ways to watch or listen to the podcast that is all about the weather. Watch live starting at 8:00 pm CT on Monday nights at live.bigbrainsmedia.com, James Spann’s Youtube Channel, or on one of ABC 3340’s digital weather channels (17.2, 40.2, 68.3). Listen to the recorded audio podcast at WeatherBrains.com or on your favorite podcast platform (Apple Podcasts, Stitcher, Spotify, etc.), or watch the recorded video on James Spann’s Youtube channel.

7:00 AM | *Not as hot next couple of days, but still the chance for showers and thunderstorms* — Perspecta Weather

9 school year essentials for students returning during the coronavirus pandemic

Bucks Fastbreak: On to the playoffs