Home Weather What is the streamflow outlook for this summer?
Announcement:  I will be doing a short weather forecast followed by live answers to your questions on Tuesday and Friday at noon using Facebook Live.   This is an experiment to try to bring local weather lovers into a conversation, and I thought it would be good to provide some human interaction in this COVID days.  The session will be on my facebook page (https://www.facebook.com/realcliffmass/).

Streamflow….the amount of water moving down our rivers and streams…. is important for many reasons, ranging from water resources and flooding  to the viability of resident or returning fish populations.  So it is useful to check on the current situation and projections for the rest of the summer.

The streamflow today (see below) looks reasonably good.  Most streamflow sites are observing near normal conditions (green colors), with some locations (NE Washington, SE Washington) above normal (blue colors).    Only a few site in the south Sound are below normal.

This relatively normal situation is the result of a near normal snowpack on April 1st (the beginning of the long “snow melt” season), and the bountiful rains over much of the reason during the past month.  To illustrate the latter, below is the percent of normal precipitation for the past month.  Well above normal over the eastern third of the State, around the Cascades, and over the southeast side of the Olympics. Far smaller areas below normal. 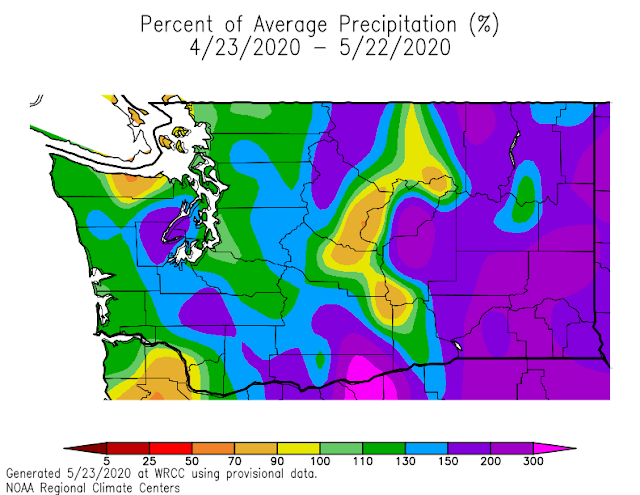 The NOAA/NWS River Forecast Center in Portland makes a streamflow forecast for 120 days (September 15th), at the end of summer dry/warm period.  The percentages of normal at that time (shown below) are, on average, roughly normal (100%), with higher than normal streamflows over southeast Washington, and near normal (green colors) over NE Washington, the Columbia River sites, and the northeast slopes of the Cascades.  Only the Yakima River sites are below normal. 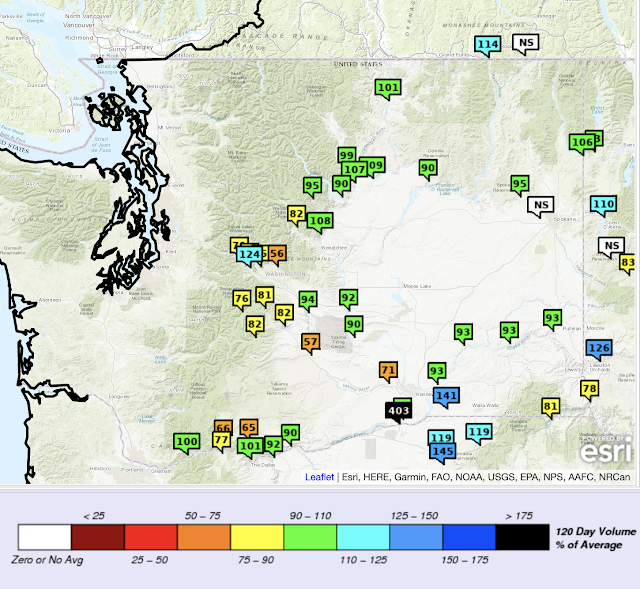 The latter low streamflow is probably due to the lower than normal snowpack over those regions today as warm, downslope conditions caused faster than normal melting (see current snowpack below). 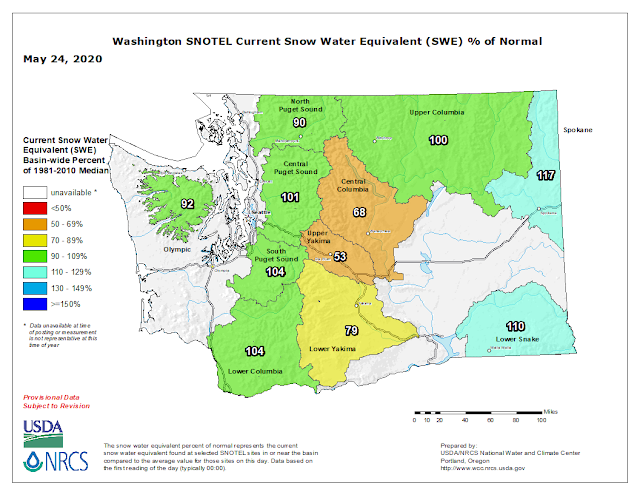 Fortunately, must of that melt water was captured by the Yakima River Reservoirs, which should be able provide water for both agriculture and fish during the summer (see below).   It is good to see that Yakima Reservoir levels are now above normal (blue is current, red is normal).

The bottom line is that at this point it appears that streamflow in Washington State rivers and streams should be near normal for most of the State and that some claims of drought and water shortages may not be well founded (see below).

Unrelenting heat for the next week in Texas – Space City Weather

6:00 AM | ****All eyes on potential coastal storm for Friday…heavy rain, gusty winds on the table at week’s end with strong rip currents...