A relatively unusual optical effect is the nighttime “light pillar”–  vertical lines in the sky at night produced by the reflection of a surface light source by ice crystals aloft.

Consider the beautiful example of a light pillar last night, captured by weather cam maestro Greg Johnson of Skunk Bay Weather (see below).  The image was taken at 3:04 AM, looking north from Kitsap Peninsula towards southern Whidbey Island.  Unsettling.

Perhaps you would enjoy a video of these ghostly features:

They are almost scary….but very beautiful at the same time.

Light pillars are associated with falling ice crystals and a view of the infrared satellite imagery at 3 AM confirms that clouds over western Washington were sufficiently high (see below) to produce such ice particles.  White clouds in the infrared indicate that the cloud tops are sufficiently cold.

As impressive as last night light pillars were, they can really get wild (see below) 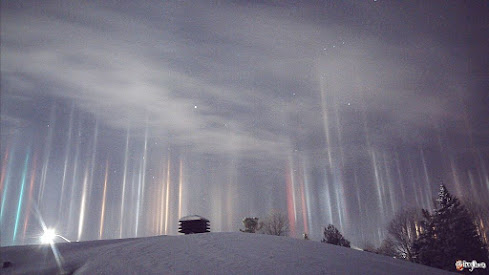 Why Do Light Pillars Occur?

Light pillars are associated with large, hexagonal (six-sided) ice crystals that tend to be oriented in a horizontal configuration as they fall ( see graphic). 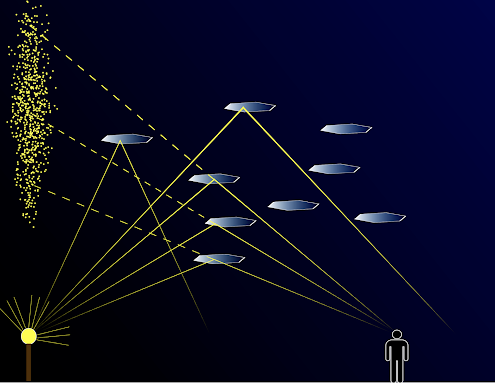 Such falling ice crystals act as small reflectors of light originating from the surface, providing the optical illusion of a vertical column of light.

A close cousin of the nighttime light pillar is the sun pillar, often viewed near sunrise and sunset (see below) 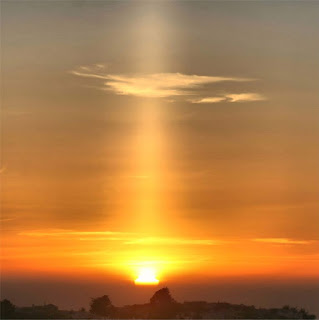 At the end of Northwest Weather Workshops, we often sit back and enjoy the extraordinary weather videos created by Greg Johnson of Skunk Bay Weather, who brings together weather cam imagery and music in ways that are both moving emotionally and highly educational.    Below is Greg’s video for this year’s workshop….. it is an extraordinary pleasure to watch.  And don’t be surprised if your eyes don’t moisten up a bit…. Some Rain At Times Through Tomorrow; Clouds Linger