The first of three plumes of moisture (atmospheric rivers) is upon us and moderate rain is currently observed along the coast (see radar at 8:30 AM).  If you are living in the interior of western Washington, NOW is the time to head out for some Thanksgiving exercise.  Rain will move in later this afternoon.  If you are in Oregon, you have the whole day.

This first plume of moisture is associated with the first “atmospheric river” in a sequence of three. You can see the “river” in the satellite-based atmospheric water vapor image shown below. Lots of water vapor over the tropics, with thin tendrils of moisture heading into the midlatitudes, including one approaching our region. As I have explained previously, when such moisture is forced upwards by our terrain, moderate to heavy rain results. 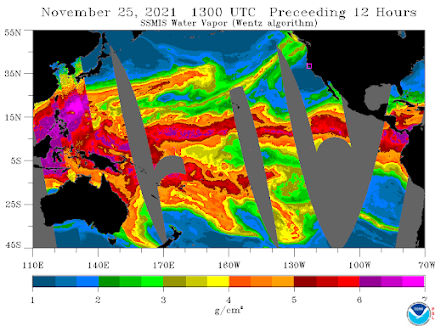 The media has recently discovered this term (atmospheric river), often hinting (or stating) that they are deadly or unusual.

Let me clarify things.  Atmospheric rivers are normal features of the earth’s atmosphere that have been known for a very long time, but were previously called other names (such as the warm sector jet or water sector moisture plume).   The image above has six atmospheric rivers, and a similar image over the Atlantic (below) shows two. 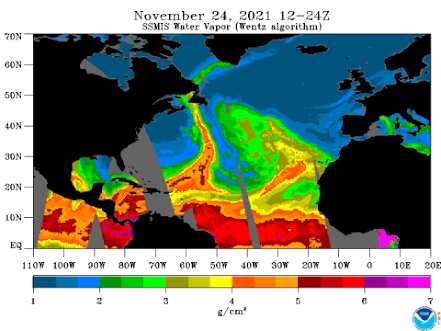 Like anything else, atmospheric rivers vary in strength, location, and longevity.  And if even a modest one gets stuck over a region for a period of time, unusually heavy precipitation totals can occur (such as happened earlier this month over Northwest Washington and southwestern British Columbia.

Let’s examine the latest forecasts for our region.  The predicted accumulated precipitation over the 24-h ending 4 AM Friday….the total of the first atmospheric river…… is shown below.

The moisture is coming in from the southwest, so the western slopes of the Olympics, Cascades, and Vancouver Island mountains get quite wet, with totals reaching 2-3 inches.  But Puget Sound and Portland are rain shadowed, generally getting less than an inch.   But if you really want to be dry, head to the lower eastern slopes of the Cascades, where the descending flow will prevent any rain.

Yes, you can stroll around Vantage or Yakima without a worry about getting wet.

A closer view reveals the profound rainshadow to the northeast of the Olympics.   Wow.  A spot south of Port Townsend should be essentially dry for the period.  No wonder so many folks retire there.  Palm Springs in western Washington.

Friday afternoon and Saturday morning should be dry over the region.  An opportunity to work off some of Thanksgiving excesses.

The next front/atmospheric river will spread precipitation over the region Saturday night and Sunday.

To illustrate, here is the 24-h precipitation ending 4 PM Sunday.   More precipitation than the Thanksgiving storm, with 5-8 inches at some mountain locations.   But again, profound rain shadowing, particularly over Yakima and Portland.   And unfortunately, little precipitation in California where is it acutely needed.

What about the real rivers?

Below is the latest flooding forecast from the NOAA/NWS river forecast center.  The biggest predicted problem will be the Skagit River, where a moderate flood is predicted, with a minor flood on the Nooksack. 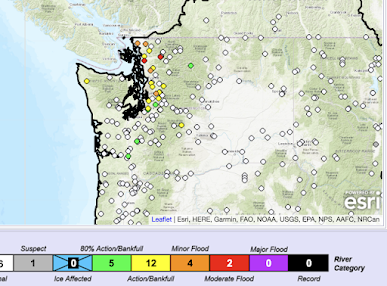 To give you more insight into the situation, below is the river stage level and discharge rate at the Skagit River near Mt. Vernon.  Time is on the x-axis and the current time is shown by the vertical line.  You will notice three peaks in the river level, the first on Saturday from today’s atmospheric river and then a larger peak on Monday from the weekend event.   The red horizontal line shows the major flood level..which is barely reached.   We are not going to be close to the November13-16th event, which is also evident in the plot 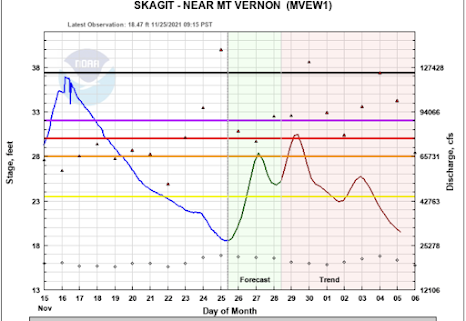 The same is true of the Nooksack River, which caused so much trouble recently.  The second event will bring things up to a major flood level, but not nearly as high November 16-17.  Can be thankful for that. 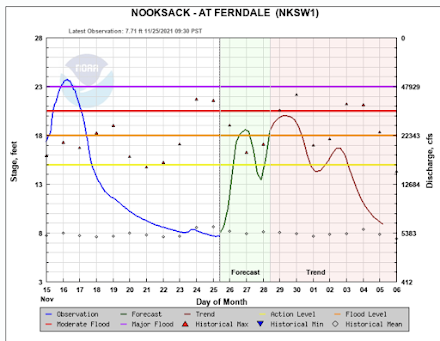 Enjoy Thanksgiving.  I have to start cooking!

Today is December 1st, but is it the first day of winter? – Space City Weather

Dry Through Saturday With Mild Afternoons

WeatherBrains 828: Haboobs Can Be Massive : The Alabama Weather Blog

Massachusetts Gov. Charlie Baker announces he will not seek third term in 2022