Today will be the warmest day of the heat wave event in the western interior, with cooling already occurring over some coastal areas.

Yesterday’s highs (shown below) ranged from over 100F east of the Cascade crest, to near 100F in the Willamette Valley, to the mid to upper 80s around Puget Sound, and to the 60s over the southern Oregon Coast.   Warmer than normal over most of the region, but few records fell.

Today, the temperatures are warmer aloft…and, in fact, the temperature around 5000 ft at the radiosonde site at Quillayute (UIL), on the northern WA coast, was near record levels for the date–not all time records, daily records (see below).  (the dot shows today’s temperature and the red line is the record for the date). 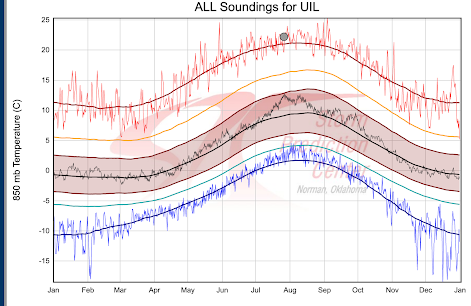 Today is warmer in some locations and cooler in others.  Below is the difference in temperature at noon compared to yesterday at the same time.   Warmer over Puget Sound, similar in the Willamette Valley, but cooler along the southern Washington and Oregon Coasts. 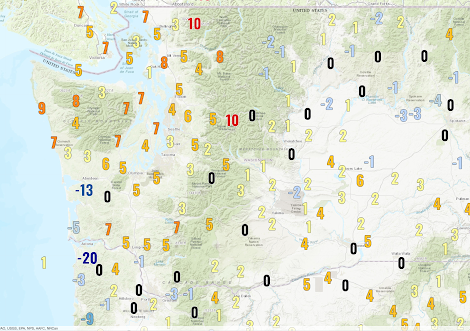 Why cooler along the coast?   Because clouds and cool air are moving up the coast, as seen in the recent satellite image.  This is forced by falling pressure in the interior. 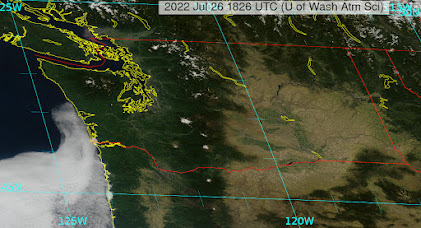 The latest forecasts for Seattle indicate today as the warmest day, but the cooling will only be minor during the next few days. 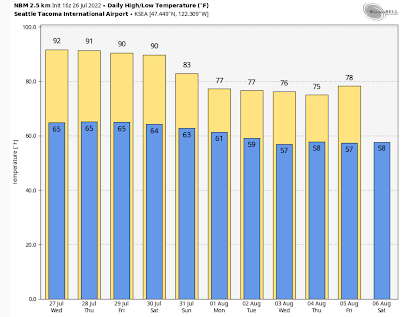 The situation in eastern Washington can only be described as torrid.  Check out the situation at Pasco in the Tri-Cities.  Scary.  Highs running to 112F on Friday. 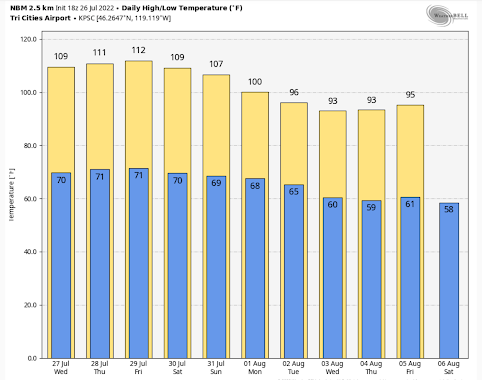 I have studied Northwest heat waves for decades, and this is a different animal from normal.

Why different?   Because the warmth is associated with a broad high-pressure ridge of high pressure aloft that is only slowly weakening and moving eastward.  As a result, cool marine air will very slowly move into the interior of western Oregon and Washington over the next several days.

There really won’t be a rapid, energetic marine push of cool Pacific air into the west.  And this lazy influx of cool air will allow eastern WA to stay warm into early next week.

Nice & Mild for Central Alabama, but the Tropics Are Stealing the Show at Midday