Meteorologists need the help of Big Tech to improve weather prediction and save lives.

How? By collecting pressures from smartphones.

This blog asks for their assistance.

There is no more useful weather observation than surface pressure.  With surface pressure alone, one can determine the three-dimensional structure of the atmosphere, sense the precursors of severe thunderstorms, and much much more.

With billions of smartphones with pressure sensors around the world, there exists the potential to greatly improve weather forecasts, particularly in third-world countries with sparse weather observations and for severe thunderstorms in the U.S.

There are research groups, including my own, that have solved the technical issues of calibrating smartphone pressures using machine learning and making the observations anonymous.

But there is a major problem:  collecting the pressures from smartphones.   To solve the problem, we need the help of the tech
community:  Apple, Google, Amazon, Samsung, Facebook, Twitter, Instagram, Microsoft, or others.

Help that could revolutionize weather prediction and save many lives.

The Demonstrated Potential of Smartphones to Greatly Improve Weather Prediction

The current generation of smartphones has pressure sensors as good as those used in many weather stations.

With extraordinary cooperation from IBM,  IBM gave the UW access to the smartphone pressures, about 60 million observations a day mainly in the U.S.

Below is a sample of the distribution of smartphone pressures at a single hour in 2018.  There is an extraordinary density of observations in the eastern half of the US, but plenty in the West.  Keep in mind that this sample is from a single app reporting from perhaps one out of a thousand smartphones.

To show the value of smartphones, consider the landfall of Hurricane Michael on the Gulf Coast on October 10, 2018 (see below).  The top right panel shows the normal data collection (each dot is pressure observation, color-coded by pressure–red is high, green/blue is low.  With power outages, many traditional observing locations were offline, but the smartphone observations were numerous and clearly showed the location of the eye. 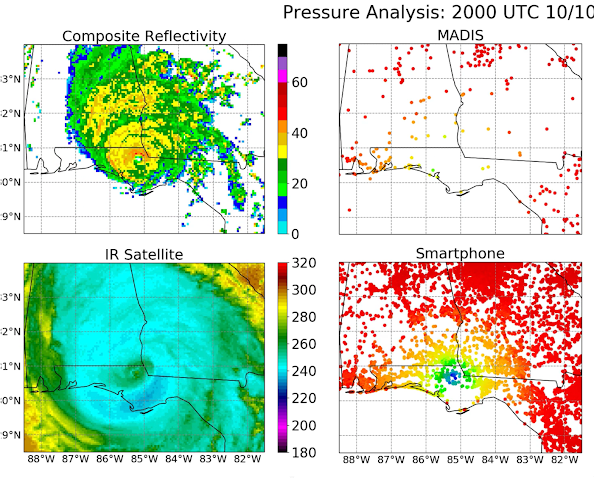 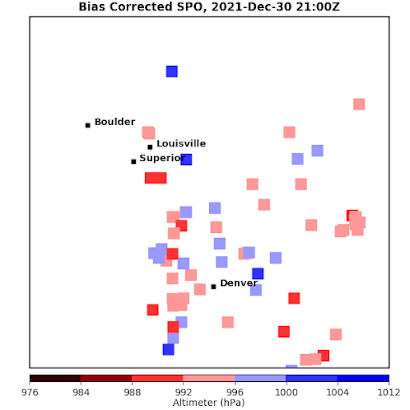 I could show you many more examples like this, such as for strong thunderstorms, where the smartphone pressures delineate critical details.

I can also show you forecasts in which the use of smartphone pressures improved the forecast.   To provide a local example, the figure below shows you a radar image (left panel) indicating a Puget Sound Convergence Zone (inside the red circle), a frequent weather feature of western Washington.  To the right are two forecasts, one using smartphone pressures and the other without.  Without the smartphone observation, the forecast system does not predict a convergence zone (middle panel), but with regional smartphone observations, it does!

There were several technical hurdles that needed to be conquered and this was done by my recent Ph.D. student, Callie McNicholas.

First, each phone has a different pressure bias/error and the elevation of phones vary.  I won’t go into details, but using machine learning and the GPS elevation/position information provided for each phone, we were able to successfully calibrate the phone pressures.


Second, since folks are rightfully concerned about privacy, we had to anonymize the pressure observations.  We did this by adding random noise to the location and collecting the pressures in small boxes with several observations.  Even with our steps to ensure privacy, the smartphone pressures (smart-anon in the figure below) had less error than the current National Weather observations (MADIS).    An extraordinary achievement of Dr. McNicholas! 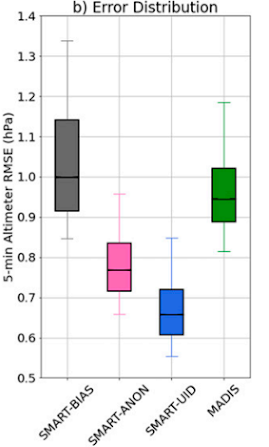 Helping the Second and Third World

We can prove that even the moderate smartphone pressure density provided by IBM/WeatherChannel can help improve our analysis of surface pressure and enhance forecasts over the relatively data-rich U.S.   But the real quantum leap may be over the second and third world where this are many smartphone users but poor meteorological observation networks.  The map of surface observations used by the European Center for Medium-Range Weather Forecasting for December 2020 is shown below.   LOTS of observations over Europe, but major holes over Africa and South America. 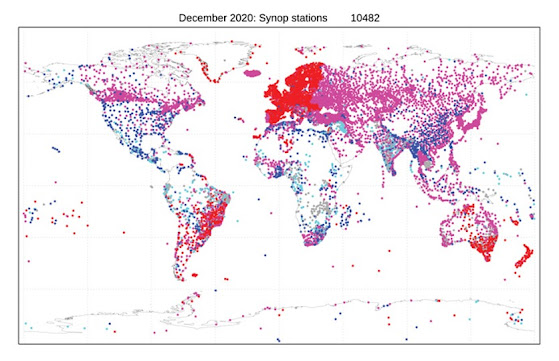 Why We Need Big Tech’s Help

And only big tech can provide this data.  Only they have apps on many phones or control the operating system on the phones.

For example, Google, which controls the Android operating system and major apps–like google maps, could solve the problem.

Can anyone in Google help?  Or contact someone that can help in Google?

Apple, which controls the iPhone operating system and many apps, could make it happen.

Facebook or Twitter, with huge numbers of folks using their apps on smartphones, could supply the data.

Amazon has apps that are on many smartphones.

You get the picture.  We can greatly improve weather forecasting,
but the assistance of one or several of the major tech firms is needed.

Are there any readers of this blog that can help?

If so, give me a call, email, or leave a comment.