SUNNY APRIL AFTERNOON: Temperatures are mostly in the mid to upper 70s across Alabama this afternoon with sunshine in full supply. Tonight will be mostly fair with a low in the mid 50s early tomorrow.

The weather will stay dry tomorrow…. with a partly to mostly sunny sky we expect a high between 77 and 81 degrees. The daytime hours Wednesday should be dry, although clouds will increase late in the day. Rain and storms return to the state late Wednesday night into the pre-dawn hours Thursday; SPC has defined a “marginal risk” (level 1/5) for that part of Alabama west of a line from Athens to Vance to Linden to Chatom. 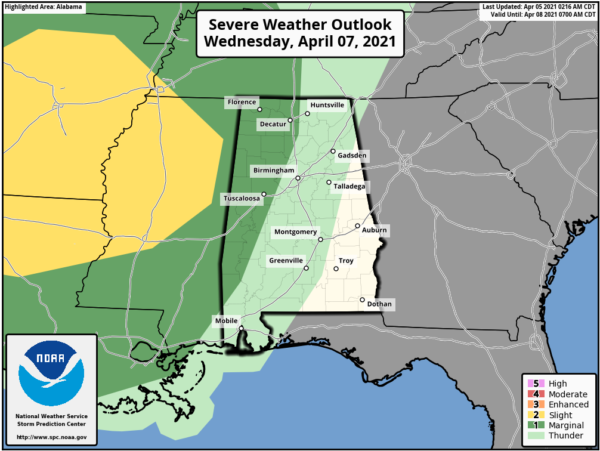 The main window for storms will come from about 10:00 p.m. Wednesday until 10:00 a.m. Thursday. While the storms should be generally weakening as they move into the state, they could still produce strong winds and some small hail. A brief, isolated tornado can’t be totally ruled out.

Thursday afternoon looks dry for the northern half of the state, but another wave rotating around an upper low northwest of the state will bring another batch of rain and storms late Thursday night and Friday. Again, those could be strong, possibly severe with gusty winds and small hail the main threat. We project highs on Thursday and Friday in the 70s, and rain amounts from both rounds of rain will be 1-2 inches.

THE ALABAMA WEEKEND: Forecast confidence is not especially high due to model inconsistency. New global model output suggests we need to mention a chance of showers (not a “wash-out”), followed by a mostly dry day Sunday. Highs will be in the mid to upper 70s over the weekend… we will have much better clarity on the situation by mid-week.

NEXT WEEK: Again, forecast confidence is not high with a very active pattern. New data suggests some risk of showers on an almost daily basis through the week… simply too early to know if we will have a severe weather threat. Temperatures will remain seasonal, with highs generally in the mid to upper 70s. See the Weather Xtreme video for maps, graphics, and more details. 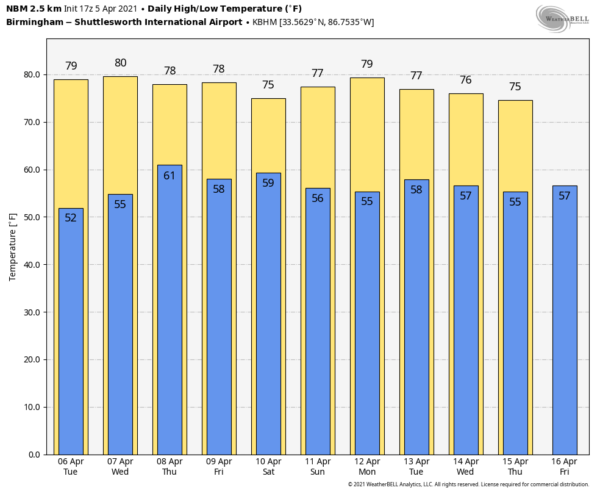 ON THIS DATE IN 1977: A large, violent F5 tornado began around 3 pm CST, 4 miles northwest of Birmingham near U.S. Highway 78, and then traveled northeast for 15 miles at 60 mph, crossing the Smithfield Estates neighborhood and then I-65. At it’s widest point, the tornado was 3/4 of a mile wide. Over 150 homes were damaged with almost 50 destroyed. A total of 22 people were killed with over 130 injured. Daniel Payne College near U.S. Highway 78 sustained heavy damage from this massive tornado with estimates over $1 million dollars. The college, opened in 1880, later closed its doors in 1977, likely a result of the enormous cost and amount of damage. There were six other tornadoes on this day including five F2 tornadoes and an F3 tornado across North and Central Alabama.

Many people do not know that the famous Dr. Theodore Fujita, for whom the Tornado Fujita Intensity Scale is named after, followed this massive tornado and supercell thunderstorm from an airplane. After tracking the storm, Dr. Fujita surveyed the damage and toyed with the idea of rating the Smithfield tornado an F6.

The same thunderstorm complex was responsible for the crash of Southern Airways Flight 242 in Georgia; it was a flight from Huntsville to Atlanta. The passenger jet went down after suffering hail damage and losing thrust on both engines; Sixty-three people on the aircraft (including the flight crew) and nine people on the ground died; twenty passengers survived, as well as the two flight attendants. One of the initial survivors succumbed to his injuries several weeks later. 50 Inches of snow in New England this weekend?