6-8 inches of rain has fallen across parts of northern Lamar and Marion Counties in Northwest Alabama. Flooding is either occurring or is imminent in the Flash Flood Warning area.

The National Weather Service in Birmingham has issued a

* At 438 AM CDT, Doppler radar indicated thunderstorms producing
heavy rain across the warned area. Between 2 and 4 inches of rain
have fallen. Flash flooding is ongoing or expected to begin
shortly.

IMPACT…Flooding of small creeks and streams, urban areas,
highways, streets and underpasses as well as other
drainage and low lying areas. 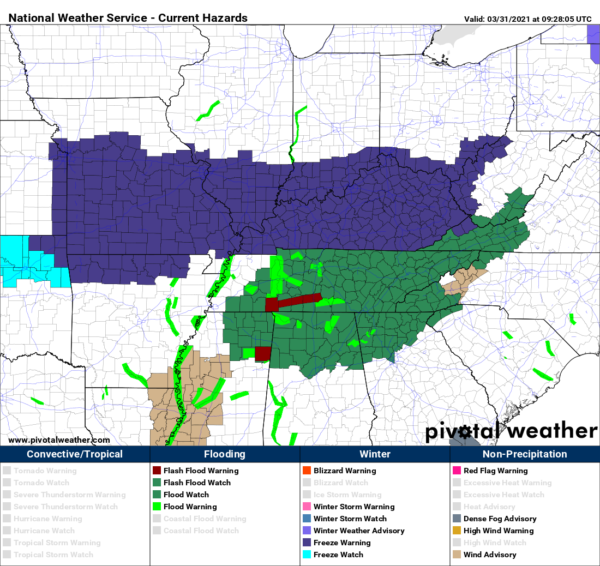 In addition, Flash Flood Watches are in effect for much of North and Central Alabama. The NWS Huntsville continues its Flash Flood Watch for Colbert, Cullman, DeKalb, Franklin, Jackson, Lauderdale, Lawrence, Limestone, Madison, Marshall, and Morgan Counties in Alabama till 7:00 PM CDT.

Those counties in dark blue to the north of us are under Freeze Warnings. We will be going under Freeze Warnings as well later today. While we may escape freezing conditions tonight, some frost is possible in colder locations, and a freeze is likely Friday and Saturday mornings areawide. Temperatures will drop rapidly behind a cold front that will be moving across the area starting late this morning. The front should reach Muscle Shoals by 8 a.m. and Birmingham by 1 p.m. Temperatures will fall around 10 degrees in the first few hours behind the frontal passage and will be in the 40s by mid-afternoon over Northwest Alabama. We will be in the 40s by 7 p.m. in the I=59 Corridor and lows by morning will range from 31-36F areawide by morning.