RADAR CHECK: Showers are more isolated across Alabama this afternoon; the ones that have formed are moving to the east/northeast. But most locations are dry with a partly sunny sky… temperatures are in the low 90s in most spots. Isolated showers will end this evening, and the sky will be mostly fair tonight.

The weather won’t change much tomorrow through Thursday… partly sunny, hot, humid days with just a few widely scattered afternoon and evening showers and storms around. Daily highs will be in the 92-95 degree range for most places.

FRIDAY AND THE WEEKEND: Showers and storms should become more numerous, especially over the northern half of the state, as a surface front creeps southward and stalls near the Tennessee state line. Understand we still can’t promise rain for everyone, but any one neighborhood stands a pretty good chance of seeing several downpours over North/Central Alabama at some point Friday through Sunday. The sky will be cloudy at times with highs between 88 and 92 degrees… South Alabama will be brighter, drier, and hotter with low to mid 90s.

NEXT WEEK: We will broad brush the forecast with the standard summer formula through the week. Partly sunny, hot, humid days with “scattered, mostly afternoon and evening showers and thunderstorms”. Highs will be mostly in the low 90s… See the daily Weather Briefing video for maps, graphics, and more details. 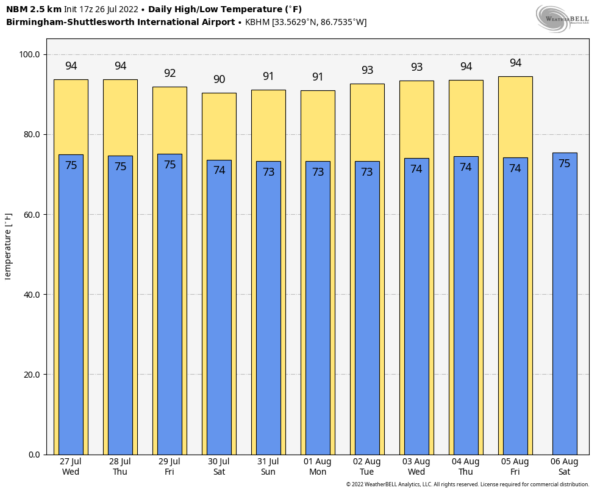 TROPICS: Same story; the Atlantic basin is very quiet and tropical storm formation is not expected at least for the next five days. The remaining names for the season are Danielle, Earl, Fiona, Gaston, Hermine, Ian, Julia, Karl, Lisa, Martin, Nicole, Owen, Paula, Richard, Shary, Tobias, Virginie, and Walter. Tropical cyclone names are maintained and updated through a strict procedure by an international committee of the World Meteorological Organization (we don’t name ’em… we just forecast them).

ON THIS DATE IN 1921: On the summit of Mt. Wellenkuppe, in Switzerland, the temperature reached 100 degrees by 10 am. The summit had an elevation of 12,830 feet and was covered in snow.

ON THIS DATE IN 1979: Tropical Storm Claudette stalled over Alvin, Texas, inundating the town with 45 inches of rain in 42 hours. The total included 43 inches in 24 hours, which is the maximum 24-hour rainfall in American history.

Look for the next Weather Briefing video here by 6:00 a.m. tomorrow…

Nice & Mild for Central Alabama, but the Tropics Are Stealing the Show at Midday