As predicted by high-resolution weather forecasting models, there were many thunderstorms and lots of lightning in eastern WA, eastern OR, and the Washington Cascades, forced by an upper-level trough moving into our region.

The lightning strike map for the 24h hours ending 1 AM today (Sunday) shows HUNDREDS of lightning flashes over the region, with a major track of boomers extending from central Oregon into southeast Washington plus another group over and to the east of the Washington Cascades.

Lightning continues today as significant thunderstorms developed over eastern Washington (see one hour of lightning strikes ending at noon below).  The infrared satellite image is superposed–you can see the swirling could of the upper-level low. 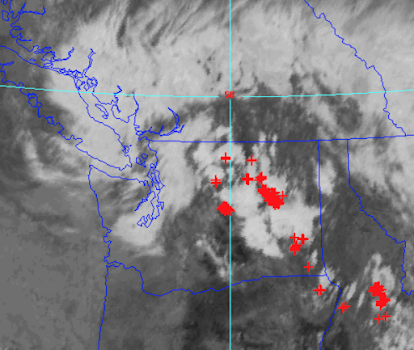 The satellite image at noon is dismal for lovers of sunny, dry skies.  The western side of Washington is completely socked in and potent thunderstorms (the oval looking cloud features) are all over eastern Washington.

The weather radar image at the same time shows moderate rain (green and yellow colors) over portions of western Washington and areas of intense rainfall (and even some hail) in thunderstorms over eastern Washington (red colors). 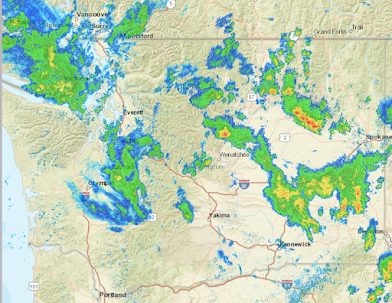 You were warned this was going to happen.

What about rainfall over the past 24 hours (ending at noon)?   As shown below, appreciable rain in the Cascades and northern Rockies, and some locations in the Columbia Basin received at much as .70 inches.   Light to moderate rain over NW Washington. 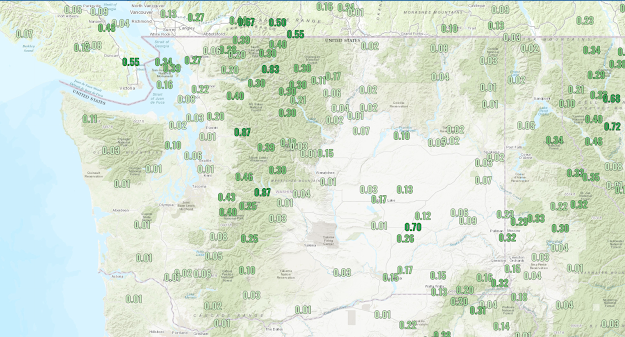 This kind of wetting down will push off the threat of wildfires….and one should note that there are NO major wildfires burning in Washington State right now.  Hopefully, folks will be responsible with (or not set off) fireworks in vulnerable areas.

Now I know what you are wondering about:  will it be raining and cold during fireworks time tomorrow?   What about conditions for an outdoor BBQ or gathering?

Well, I think I have some (relatively) good news:  although there could be some residual showers Monday morning, by early evening it should be generally dry.  But not warm:  mid 60s in the west.  Nice in the Columbia Basin.

Below is forecast precipitation between 8 PM and 11 PM tomorrow July 4th.  A few sprinkles in NW Washington and near the Canadian border.   Lots of rain in BC….but that doesn’t matter!

The next few days after the July 4th weekend should see low 70s with the chance of a few sprinkles.  No heatwave in sight.

We have about 2.5 months of summer left.

Alabama NewsCenter — Honored by the BBJ, Alabama Power’s John Smola is focused on the future : The Alabama Weather Blog

Dry Weekend Ahead For Much Of Alabama : The Alabama Weather Blog

GOP, in FBI raid, gets a golden election egg