The work week ends the way it started, with tons of sunshine. Temperatures are milder today with many of us approaching 70 degrees this afternoon and overall it has been a fantastic and quiet week of weather for Alabama. Tonight will feature some passing clouds, with lows in the mid and upper 40s for most locations.

FRIDAY NIGHT LIGHTS: For the high school playoff games tonight, the sky will be clear with temperatures falling through the 50s.

USA BRIEF: A storm forming over the central U.S. today will bring isolated heavy showers and thunderstorms to the region through Saturday before strengthening while shifting over the Northeast Sunday where snow and ice is possible from western New York into New England on the leading edge of the storm. Dry and gusty conditions will bring elevated fire weather concerns over the weekend to southern California.

THE ALABAMA WEEKEND: Tomorrow will feature plenty of sunshine once again with highs in the low 70s. Sunday will feature more clouds as moisture levels rise ahead of an approaching front, highs should be in the lower to mid 70s. We can’t rule out a few showers across northern portions of the state late in the day, but any rain in Central Alabama will be light and spotty.

FOOTBALL WEATHER: Tomorrow, Alabama hosts Kentucky (3:00p CT kickoff at Bryant Denny Stadium)… the sky will be sunny with temperatures in the low 70s at kickoff, falling back into the 60s during the second half.

Auburn hosts Tennessee tomorrow evening (6:00p kickoff at Jordan Hare Stadium)… a great night for football with a clear sky. Temperatures will fall from the low 60s at kickoff, into the upper 50s by the final whistle.

IN THE TROPICS: A non-tropical area of low pressure could form between the Bahamas and Bermuda by early next week. The system could gradually develop subtropical characteristics through the middle of next week while it moves northeastward over the western Atlantic. Formation chance through 5 days…low…20 percent. 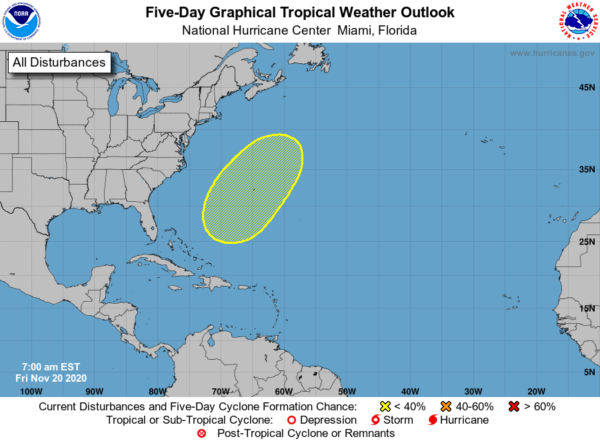 The rest of the Atlantic is quiet with no signs of development into next week..Hopefully we are seeing this historic season wind down and come to an end.

WORLD TEMPERATURE EXTREMES: Over the last 24 hours, the highest observation outside the U.S. was 108.3F at Tete Chingodze, Mozambique. The lowest observation was -51.3F at Dome A, Antarctica.

WEATHER ON THIS DATE IN 1987: Blustery northwest winds created snow squalls in the Great Lakes Region and the Upper Ohio Valley. Snowfall totals in Upper Michigan ranged up to 18 inches at Paradise. Lake City, MI received 9.5 inches of snow in four and a half hours. Up to a foot of snow blanketed Oswego County in western New York State. Strong winds produced wind chill readings as cold as 22 degrees below zero at Duluth, MN. Midday Nowcast: Sunny and Cooler the Rest of Today : The Alabama Weather Blog