A cloudy, wet day is underway across Alabama as Nicholas spreads rain over the state. Due to the clouds and rain, temperatures will not make it out of the 70s for much of North/Central Alabama. We can’t rule out a few rumbles of thunder this afternoon as well. The more widespread and soaking rains are over the southern half of the state. 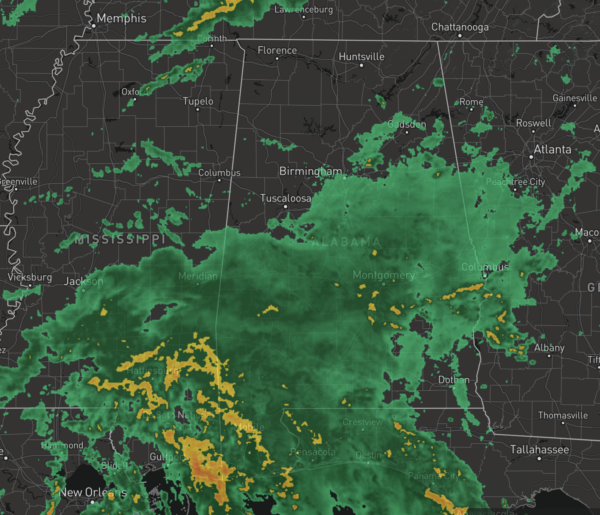 TOMORROW THROUGH THE WEEKEND: The tropical air mass will remain in place, so it will remain mainly cloudy with scattered to perhaps numerous showers and thunderstorms remaining in the forecast each day. Rain is possible at anytime, but the greatest coverage will occur during the afternoon and evening hours. Highs tomorrow and Friday will likely remain in the upper 70s, but should return to the low and mid 80s Saturday and Sunday as the storms thin out and become more scattered.

NEXT WEEK: Moist air remains in place… for now we expect a mix of sun and clouds each day with the continued chance of scattered showers and thunderstorms, especially during the afternoon and evening hours. Highs should be in the mid 80s, which is pretty close to where they should be this time of year.

IN THE TROPICS: Three features the NHC is monitoring, two of which will likely become Odette and Peter in the coming days. 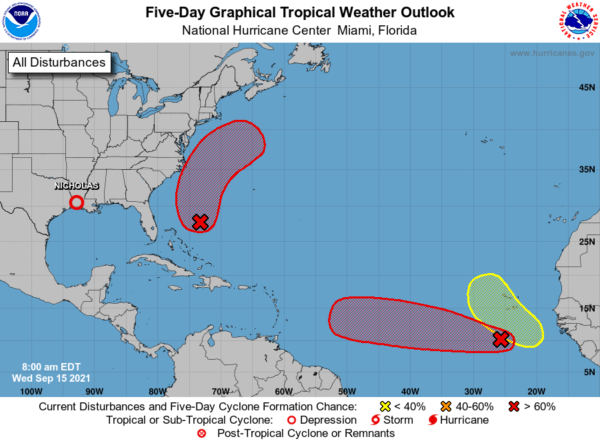 1. Showers and thunderstorms associated with a low pressure area located a few hundred miles south-southwest of the Cabo Verde Islands continue to show signs of organization. Environmental conditions are expected to remain conducive for development, and a tropical depression is likely to form within the next couple of days. This system is expected to move westward to west-northwestward across the tropical Atlantic during the next several days. Formation chance through 48 hours…high…80 percent.

2. A broad area of low pressure located a few hundred miles northeast of the central Bahamas is producing a large area of disorganized showers and thunderstorms. Environmental conditions appear marginally conducive for development, and a tropical depression is likely to form during the next couple of days while the system moves north-northwestward to northward off the southeast U.S. coast. Regardless of development, this system could bring high surf to portions of the southeast and mid-Atlantic U.S. coasts later this week.Formation chance through 5 days…high…70 percent.

3. A tropical wave is expected to emerge off the west coast of Africa in a day or two. Thereafter, environmental conditions are forecast to be conducive for development while the system moves generally west-northwestward to northwestward over the far eastern Atlantic. Formation chance through 5 days…low…20 percent.

WORLD TEMPERATURE EXTREMES: Over the last 24 hours, the highest observation outside the U.S. was 113.5F at Adrar, Algeria. The lowest observation was -91.1F at Vostok, Antarctica.

WEATHER ON THIS DATE IN 1982: A snowstorm over Wyoming produced 16.9 inches at Lander to establish a 24 hour record for September for that location.

$24 billion in goods is floating outside California’s biggest ports