The spring-like warmth continues today with a generally sunny sky allowing temperatures to warm into the 60s late this morning, and we will top out in the low and mid 70s across North/Central Alabama this afternoon. 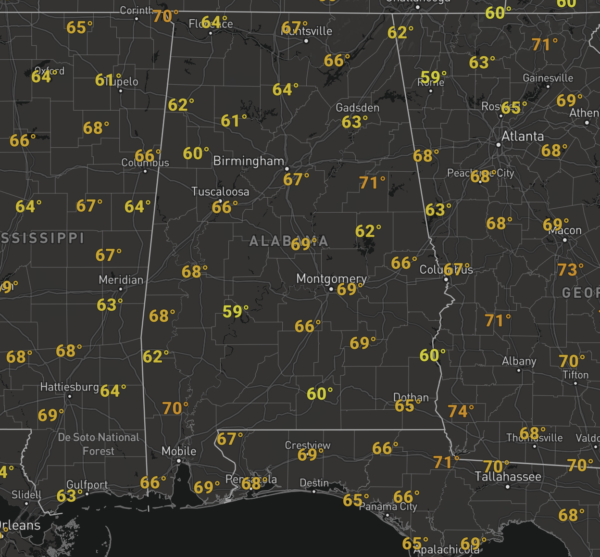 These are 10-15 degrees above average for early December in Alabama. A clear sky tonight will allow for areas of fog to develop again overnight, and lows by first thing tomorrow morning will be around the 50 degree mark.

WEEKEND WEATHER: The unseasonably warm weather continues into the weekend as the pattern doesn’t change much. Saturday and Sunday will feature a mix of sun ands clouds with highs in the low 70s. While most of the weekend will be dry, a brief shower can’t be ruled out over the northwest corner of the state tomorrow. And, a few isolated showers are possible over the northern half of the state Sunday. Rain chances will increase overnight Sunday as a cold front approaches the state.

FOOTBALL WEATHER: Tomorrow’s SEC Championship game between Alabama and Georgia will be played in Mercedes Stadium in Atlanta (3p CT kickoff). The day in Atlanta will be dry and mild… with a partly sunny sky temperatures will reach the low 70s by mid-afternoon.

RAIN RETURNS: The cold front moves into the state on Monday bringing widespread rain to the state, with perhaps some rumbles of thunder, but no severe storms. Rain amounts of around 1/2 inch are likely. Temperatures Monday will be cooler as highs will only be in the 50s and 60s.

ACTIVE NEXT WEEK: The front stalls across South Alabama next week, and that will allow for multiple rounds of rain and storms as impulses of energy move along the frontal boundary. Each day will feature the chance of rain, and we may have to deal with a few strong storms at times next week, but still severe storms are not expected. We catch up on some rain next week as statewide totals over the next seven days looks to be in the 2-4 inch range. Afternoon highs much of next week should be in the 60s.

WORLD TEMPERATURE EXTREMES: Over the last 24 hours, the highest observation outside the U.S. was 113.2F at Marble Bar, Australia. The lowest observation was -61.8F at Verhojansk, Russia.

Free Covid tests: Website for ordering at-home tests is up and running