SPRING-LIKE WEATHER CONTINUES: Temperatures are generally in the 70-75 degree range across Alabama this afternoon; a few high clouds are moving through, but the low levels are dry and there is nothing on radar. Tonight will be mostly fair with a low in the 45-55 degree range.

Mild weather continues over the weekend… we project afternoon highs in the low 70s, which is about ten degrees above average for early December. Moisture levels will rise, and we will introduce the chance of a few isolated showers tomorrow afternoon over North and West Alabama. The chance of any one spot getting wet tomorrow is 15-25 percent, mainly in areas north and west of Birmingham. Otherwise, expect a partly sunny sky tomorrow.

A few showers are possible Sunday as a weak disturbance moves across the state. The rain won’t be too widespread or heavy, but a passing shower is a distinct possibility. The sky will be occasionally cloudy, and clouds will thicken Sunday night ahead of a cold front.

NEXT WEEK: That front will bring rain to the state Monday, and possibly a thunderstorm or two. Severe storms are not expected, and temperatures will hold in the 60s Monday. The front becomes stationary, and we will forecast occasional showers and a few storms on Tuesday and Wednesday. The weather then trends drier Thursday and Friday. Rain amounts for the week will be in the 1-2 inch range, with isolated amounts to 3 inches. See the Weather Xtreme video for maps, graphics, and more details. 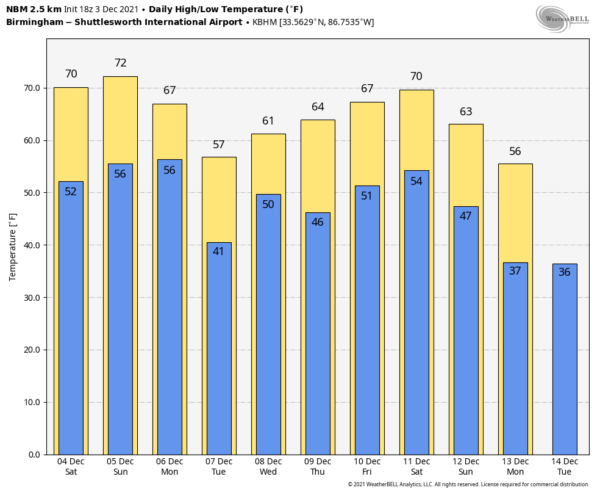 FOOTBALL WEATHER: Tomorrow’s SEC Championship game between Alabama and Georgia will be played in Mercedes Stadium in Atlanta (3p CT kickoff). The day in Atlanta will be dry and mild… with a partly sunny sky temperatures will reach the low 70s by mid-afternoon.

ON THIS DATE IN 1983: The 1983 Iron Bowl game is one of the greatest in the history of the rivalry. It was played at Legion Field on December 3rd. The game started in beautiful warm sunshine after a stormy night of very heavy rains that caused severe flooding in the Birmingham area. 9.22 inches of rain fell at the National Weather Service Forecast Office, which was on Oxmoor Road at the time. IF the amount had been recorded at the Airport, it would have stood as the all-time 24-hour rainfall record for the city (until Hurricane Ivan). One person was killed due to the flooding in Bessemer.

During the third quarter, a line of severe thunderstorms was approaching western Jefferson County and a tornado warning was issued. The radar at Centreville showed a well-defined hook echo heading directly toward the stadium. The game was not stopped. By ten minutes to go in the game, the rain was coming down in torrents as Auburn tried to control the ball and win the game in the horrible conditions as they clung to a 23-20 lead. The rain began to fall so heavily that you could barely see the field on the cameras.

Fortunately, the storm did not produce a tornado in western Birmingham, or the results would have been catastrophic. But later, the same storm dropped an F3 tornado that heavily damaged the Winn Dixie store at Sky City in Oxford, killing two people. A total of seven tornadoes touched down across the state that afternoon and evening.

WEATHER BRAINS: Don’t forget you can listen to our weekly 90-minute show anytime on your favorite podcast app. This is the show all about weather featuring many familiar voices, including our meteorologists here at ABC 33/40.

Look for my next Weather Xtreme video here by 6:00 a.m. Monday… enjoy the weekend!