RADAR CHECK: Rain is widespread across the southern 2/3 of Alabama this afternoon, thanks to the remnants of Nicholas over Louisiana. The heaviest rain has been falling near the Gulf Coast… flash flood warnings are in effect for the southern part of Mobile and Baldwin counties. SPC maintains a “marginal risk” (level 1/5) over the southwest corner of the state through tonight due to the potential of a brief, isolated tornado in a few spots.

Rain across North Alabama is more scattered in nature; the sky is overcast pretty much statewide with temperatures in the 70s. Periods of rain will continue tonight.

TOMORROW/FRIDAY: A moist, tropical airmass will continue to hang over Alabama. The sky will be mostly cloudy both days, and showers will remain possible. It won’t rain all day, but be ready for some rain at times if you have something planned outdoors. A rumble of thunder is possible in spots, but there is no risk of severe thunderstorms. The high will be in the 77-80 degree range.

THE ALABAMA WEEKEND: Not much change; we have seen some evidence the air will be a little drier across the northeast part of Alabama, but there isn’t much evidence to support that idea in the latest batch of global computer model output. The sky will remain mostly cloudy Saturday and Sunday with a chance of showers both days. Maybe a thunderstorm in spots. Again, no “wash-out”, but occasional rain is a good possibility. Highs over the weekend will be close to 80 degrees.

NEXT WEEK: Nothing to really sweep the moist air out of here, so we will maintain the chance of at least scattered showers and thunderstorms on a daily basis with a few intervals of sun along the way. Highs will be in the 80s… See the Weather Xtreme video for maps, graphics, and more details. 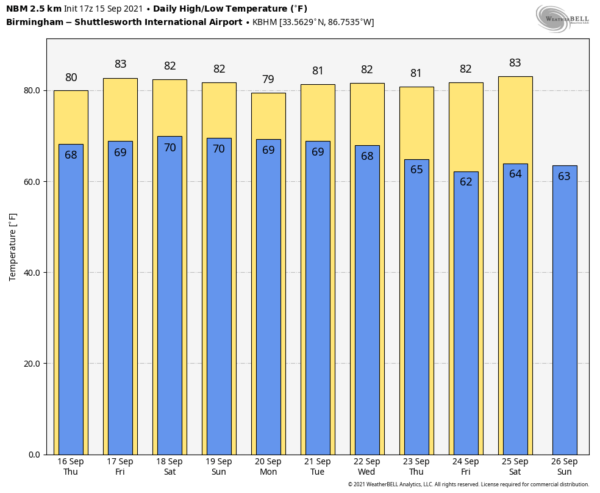 TROPICS: Nicholas has dissipated over Louisiana this afternoon. Elsewhere, a tropical wave northeast of the Bahamas has a high chance of becoming a tropical depression or storm by Friday; it will move north, and then northeast staying east of the U.S. 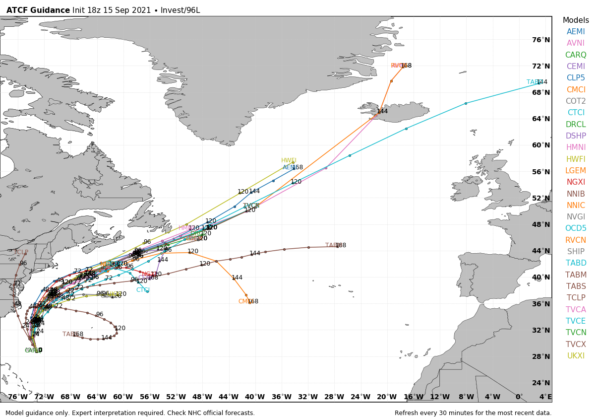 And, a disturbance in the eastern Atlantic also has a high chance of becoming a tropical storm by Friday; it will move to the west/northwest over the next few days. We are seeing evidence this system will begin to gain latitude before reaching the Leeward Islands… there is a decent chance this one recurves into the Atlantic before reaching the U.S. But, that is still not carved in stone. 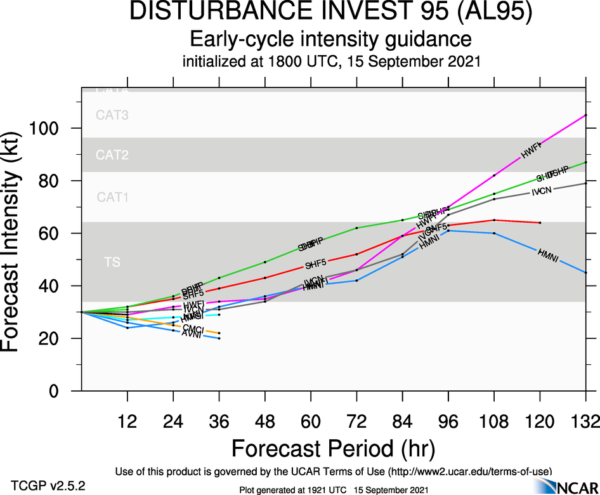 There are no tropical systems threatening the central Gulf Coast through early next week.

FOOTBALL WEATHER: For the high school games Friday night, the sky will be mostly cloudy, showers are very possible, so take the rain gear. Temperatures will fall slowly through 70s during the games.

ALABAMA AT FLORIDA (2:30p CT kickoff): It will be a warm, humid day in Gainesville. The sun will be out at times, but there is a pretty good chance of a few passing showers or thunderstorms during the game (take the rain gear)… temperatures will fall from near 84 at kickoff, into the low 80s by the fourth quarter.

AUBURN AT PENN STATE (6:30p CT kickoff): A passing shower can’t be ruled out during the game in State College (especially the first half), otherwise mostly fair with temperatures falling from around 80 at kickoff, into the low 70s by the final whistle.

UAB AT NORTH TEXAS (6:30p CT kickoff): The sky will be clear in Denton, Texas Saturday evening. Temperatures will fall from around 90 degrees at kickoff, to near 80 by the fourth quarter.

NORTH ALABAMA AT JACKSONVILLE STATE (6:00p CT kickoff): It will be a warm, humid Saturday night; a shower or storm can’t be ruled out, mainly during the first half. Temperatures will fall from near 80 at kickoff, into the mid 70s by the final whistle.

TROY AT SOUTHERN MISS (6:00p CT kickoff): A few showers are likely during the first half of the game, otherwise it will be a warm, humid night in Hattiesburg with temperatures falling from the low 80s into the upper 70s.

ON THIS DATE IN 1945: A hurricane entered the south Florida coast at Homestead, curving northward right up through the center of Florida, remaining over land, and exited near Jacksonville Beach with winds gusting to 170 mph.

The following is from the Homestead Air Reserve Base. “On Sept. 15, 1945, three years to the day after the founding of the Homestead Army Air Field, a massive hurricane roared ashore, sending winds of up to 145 miles per hour tearing through the Air Field’s buildings. Enlisted housing facilities, the nurses’ dormitory, and the Base Exchange were all destroyed. The roof was ripped from what would later become building 741, the Big Hangar. The base laundry and fire station were both declared total losses. The few remaining aircraft were tossed about like leaves.”

Stocks gain ground on Wall Street ahead of tech earnings