**No Weather Xtreme video this afternoon; just one video per day through the weekend due to the holiday schedule**

RADAR CHECK: Light rain is falling over parts of North and West Alabama this Thanksgiving afternoon with temperatures mostly in the low to mid 60s. The rain will continue to push southeast this evening, and will end later tonight as a cold front passes through.

Tomorrow will be a sunny, but sharply colder day. Temperatures won’t get out of the 40s over the northern third of the state with a brisk north wind. Then, by early Saturday morning, we project a low in the 22-32 degree range with a clear sky and light wind.

Saturday will feature sunshine in full supply with a high in the 58-61 degree range. A disturbance will bring some clouds to South Alabama Sunday, along with a small risk of some light rain there. For the northern half of the state, Sunday will be dry with a partly sunny sky along with a high around 60 degrees.

NEXT WEEK: Global model data continues to show a very quiet weather pattern across the Deep South… we expect mostly sunny days and fair nights with highs in the upper 50s Monday, and 60s for the rest of the week… See the Weather Xtreme video for maps, graphics, and more details. 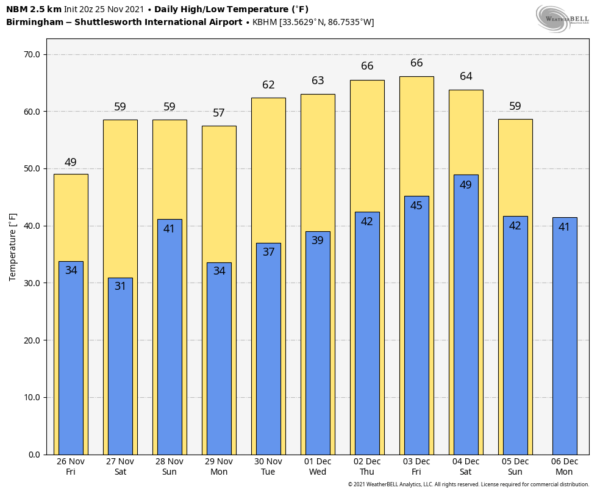 FOOTBALL WEATHER: For the high school playoff games tomorrow night, the weather will be clear and cold with temperatures falling from the mid-40s at kickoff, into the 30s by the fourth quarter.

UTEP at UAB (1:00p CT kickoff at Protective Stadium in Birmingham): The sky will be sunny with temperatures hovering around 50 degrees during the first half, dropping into the 40s by the fourth quarter.

COASTAL CAROLINA AT SOUTH ALABAMA (2:30p CT kickoff at Hancock Whitney Stadium): Expect a sunny sky with a kickoff temperature near 60 degrees, then falling through the 50s during the second half.

BIRMINGHAM SOUTHERN AT MARY HARDIN-BAYLOR (12:00p CT kickoff in Belton, Texas): The sky will be mostly cloudy with a brief, passing shower possible. Temperatures will hover around 60 degrees during the game.

TROY AT GEORGIA STATE (1:00p CT kickoff in Atlanta): The sky will be sunny with temperatures hovering in the 55-60 degree range during the game.

ALABAMA AT AUBURN: (2:30p CT kickoff at Jordan-Hare Stadium): The sky will be sunny with a kickoff temperature near 60 degrees… falling through the 50s during the second half. A perfect day for the biggest football game of the year in Alabama.

ON THIS DATE IN 1950: Called the “storm of the century” this storm impacted the eastern part of the US, killing hundreds and causing millions of dollars in damages. New York City recorded a 94 mph wind gust and Bear Mountain, just north of the city recorded a 140 mph gust. Record low temperatures were reported on the southern end of this storm in Tennessee and North Carolina. This storm was unique as Pittsburgh saw 30 inches of snow, while Buffalo saw 50 degrees with 50 mph wind gusts.

Here in Alabama, the temperature at Birmingham dropped to 5 degrees on November 25, 1950… our coldest November morning on record to this date. The low at Montgomery was 13, and Mobile dropped to 22.

Dry Through Saturday With Mild Afternoons

WeatherBrains 828: Haboobs Can Be Massive : The Alabama Weather Blog

Poll: Young Americans say they’re fearful about the future of the country