ANOTHER DELIGHTFUL DAY: With sunshine in full supply, temperatures are mostly in the mid 70s across Alabama this afternoon… the average high for Birmingham on October 19 is 75. Tonight will be clear and cool again with a low between 46 and 52 degrees.

Dry weather continues for most of the state tomorrow, although a few showers could develop near the Gulf Coast by afternoon. The sky will be partly sunny with a high in the upper 70s.

SHOWERS THURSDAY: A cold front will bring showers to the state late tomorrow night and Thursday. This won’t be an “all day” kind of rain or a wash-out, but a few passing showers are likely with a mostly cloudy sky. A rumble of thunder is possible, but no severe storms are expected. Rain amounts should be under 1/2 inch, and the high will be in the mid 70s.

FRIDAY AND THE WEEKEND: We are seeing better model agreement this afternoon; a new surge of dry air will push into the state Friday, although a few lingering showers can’t be ruled out over the southern quarter of the state. Then, Saturday and Sunday look dry with a partly to mostly sunny sky. Afternoon highs will be generally in the 75-80 degree range over the weekend, with lows in the 50s.

NEXT WEEK: Monday and Tuesday look dry, but a front will have the potential to bring some rain to the state later in the week… See the Weather Xtreme video for maps, graphics, and more details. 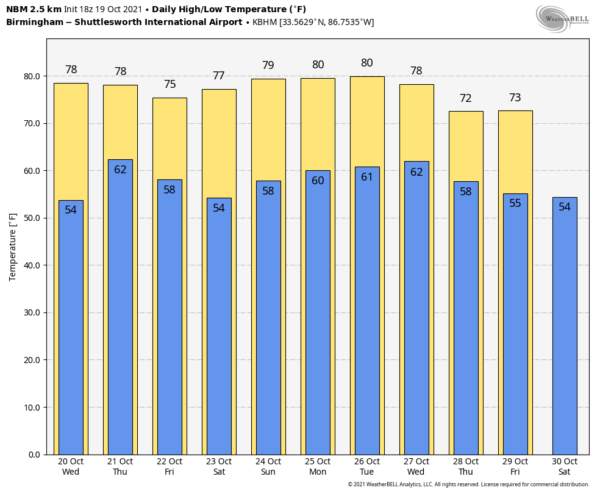 TROPICS: All remains quiet across the Atlantic basin this afternoon, and tropical storm formation is not expected through the weekend.

ON THIS DATE IN 1996: The opening game of World Series between the Braves and Yankees in New York was postponed by heavy rains and high wind from a major storm system affecting the East Coast, marking the third time in history that the World Series opener had been postponed. Overall, nine of the 22 games that have been canceled in Series history were scheduled in New York or Brooklyn.

ON THIS DATE IN 2007: A total of 87 tornadoes were reported in the United States from Oct. 17-19, a new record outbreak for the month, according to NOAA’s Storm Prediction Center in Norman, Oklahoma. The outbreak also contributed to the monthly total of 105 tornado reports – the second highest for October, behind the 117 tornadoes in October 2001. Records date back to 1950.