THIS WEEKEND: We’re starting off with some clouds across the area this morning, and those will continue to build throughout the day. With the heating of the day, we’ll have some isolated to scattered showers and thunderstorms develop. Those will start during the afternoon and persist into the evening and linger into the late-night hours before eventually dissipating. During the overnight hours, we’ll have some patchy dense fog develop. Highs will be in the mid to upper 80s.

Sunday will be a mostly sunny day, with only a few isolated to scattered showers and thunderstorms during the afternoon hours. A front will begin to move into the northwestern parts of the area during the late-night and overnight hours that will bring a chance of storms. A Marginal Risk for severe storms is up for the northwestern and extreme northern parts of the area for the threat of isolated damaging wind gusts. Highs will be in the mid to upper 80s. 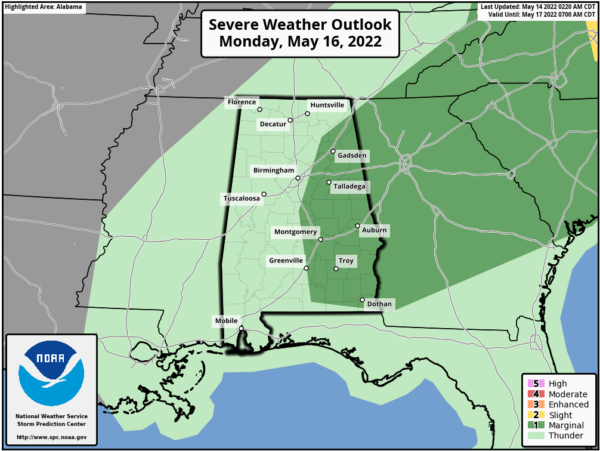 NEXT WEEK: The front will move through the remainder of the area on Monday that will bring a small chance of scattered showers and thunderstorms. Much of the eastern half of the area is under a Marginal Risk for severe storms, where isolated damaging wind gusts are possible. Highs will be in the lower 80s to the lower 90s.