The 2021 NFL free-agency period officially begins at 4 p.m. ET on March 17, but speculation about which players might be switching teams this offseason began months ago.

With more than half of the league’s 32 teams rumored to be considering a change at quarterback, with franchises dealing with a lower salary cap and with dozens of big-name players about to hit the market, this free-agency period promises to be one of the NFL’s busiest in years.

With that in mind, ESPN’s NFL Nation breaks down each team’s needs and potential free-agent fits.

Fresh off an appearance in the AFC Championship Game, the Bills’ future hasn’t looked this bright since the 1990s. But with only three starters returning on the offensive line and a defense that lacks a consistent pass rush, general manager Brandon Beane will be busy fortifying the trenches. Read more from Marcel Louis-Jacques

Stephen A. Smith explains why next season and beyond are so important for Bill Belichick.

The Patriots have an abundance of salary-cap space in an offseason when many teams are feeling a crunch, so there’s an opportunity for them to think big to fill glaring needs. Pass-catchers such as wideouts Chris Godwin, Allen Robinson II and Kenny Golladay and tight ends Hunter Henry and Jonnu Smith could be on New England’s wish list. They also need to settle on a QB with Cam Newton a pending free agent. Read more from Mike Reiss

With a projected $68 million in salary-cap space, the Jets are one of the few teams positioned to spend aggressively, even if that isn’t the preference of general manager Joe Douglas. Cornerbacks Richard Sherman and Jason Verrett, who played for Jets head coach Robert Saleh in San Francisco, are names to watch in free agency. Read more from Rich Cimini

The Ravens’ focus this offseason is improving quarterback Lamar Jackson’s supporting cast. A No. 1 wide receiver such as Allen Robinson or Kenny Golladay and a high-end interior lineman such as guard Joe Thuney or center Corey Linsley could be on their shopping list. Read more from Jamison Hensley

If the Bengals can add another dynamic receiving target this offseason, their offense will be poised to take a big step in quarterback Joe Burrow’s second season. The offensive line is another area of need. And if they don’t bring back defensive end Carl Lawson, the Bengals will need to add another pass-rusher. Read more from Ben Baby

With their offense in good shape, defense figures to be the focus for the Browns, who will look to surround pass-rusher Myles Garrett with more talent. Finding a playmaking linebacker and help for the secondary could be priorities in free agency. Read more from Jake Trotter

Because of the smaller salary cap and their backloaded contracts, the Steelers don’t have much money to use in free agency. The priority is to retain a few of their defensive players, such as cornerbacks Mike Hilton or Cameron Sutton, and find suitable replacements for wide receiver JuJu Smith-Schuster and running back James Conner. Read more from Brooke Pryor

It’s been a turbulent offseason for the Texans, with quarterback Deshaun Watson’s future the biggest topic right now. Houston also must decide whether wide receiver Will Fuller is in its future plans. And granting J.J. Watt’s request to be released means a big focus will be adding talent to the defense — specifically the defensive line. Read more from Sarah Barshop

The Colts addressed their quarterback situation with the addition of Carson Wentz, but there are other needs. The priorities include determining the future of wideout T.Y. Hilton, finding a replacement for left tackle Anthony Castonzo, adding help at linebacker and boosting the pass rush. Read more from Mike Wells

The Jaguars have the most cap space available ($77 million) in the league and needs at left tackle, tight end, defensive tackle and in the secondary. Potential targets in free agency are tight end Hunter Henry and defensive tackle Dalvin Tomlinson. Read more from Mike DiRocco

After finishing 30th in the league with 19 sacks and allowing opposing offenses to score touchdowns on 69% of their red zone visits, the Titans need to improve their defense. Getting an outside linebacker via free agency is paramount. Read more from Turron Davenport

Denver’s offseason might be defined by who stays, as safety Justin Simmons and defensive end Shelby Harris could hit the open market. The Broncos also have a significant decision to make on the option year for linebacker Von Miller, who missed last season because of injury. Read more from Jeff Legwold

Addressing the offensive line will be a focus for the Chiefs, particularly with tackles Mitchell Schwartz and Eric Fisher coming off serious injuries. They also might be looking at help for the back seven on defense. Read more from Adam Teicher

For the Raiders, trying to find that elusive game-changing edge rusher while shoring up a young and riddled secondary should be priorities. A bruising, change-of-pace running back and an interior defensive lineman who can move the pocket are other potential targets. Read more from Paul Gutierrez

The Chargers could address their offensive line as they work to provide protection for quarterback Justin Herbert. They also need to secure another reliable wide receiver and decide what to do with tight end Hunter Henry, a pending free agent. Read more from Shelley Smith

While they will not be big spenders in free agency because of talks with quarterback Dak Prescott, the Cowboys have needs at all levels of the defense. The linebackers and cornerbacks could look much different next fall, and a pass-rusher could be a need if Aldon Smith doesn’t return. Read more from Todd Archer 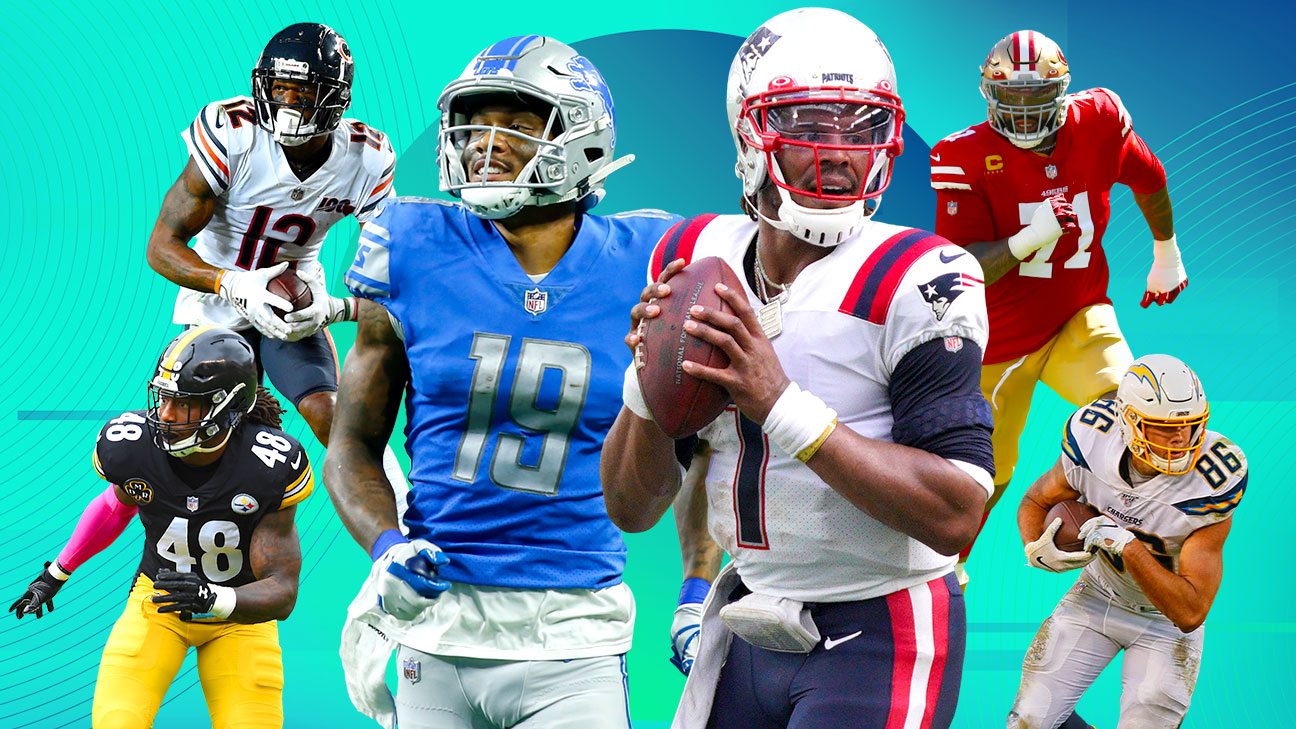 Figuring out what to do with their defensive line is at the forefront of this offseason as the Giants decide whether they can afford to keep pass-rusher Leonard Williams and run-stuffer Dalvin Tomlinson. They also should be targeting top-of-the-market talent at edge rusher and wide receiver. Read more from Jordan Raanan

The Eagles are projected to be more than $40 million over the 2021 salary cap and are in the midst of a youth movement, so it’s unlikely they’ll be major players in free agency. A veteran quarterback (Jacoby Brissett?), help at the skill positions and reinforcements for the secondary could be targets during the second wave of free agency. Read more from Tim McManus

Washington must provide more help for its QBs, starting at the wide receiver and tackle positions. It also should have another tight end. Defensively, it needs a linebacker, safety and cornerback. A few receivers will tempt Washington because of their speed, including Curtis Samuel, Will Fuller and Nelson Agholor. Read more from John Keim

With little cap space and needs across the board, GM Ryan Pace will need to get creative to add a veteran QB and keep pending free agent Allen Robinson II at wide receiver. If the Bears are unable to land a big-name quarterback, veterans such as Alex Smith, Andy Dalton or Ryan Fitzpatrick could be within their price range. Read more from Courtney Cronin

Through conversations with former players, coaches and key figures, Peyton Manning gets to the heart of football history and its cultural impact. Watch on ESPN+

The Lions don’t have much money after trading quarterback Matthew Stafford and aren’t expected to contend immediately; GM Brad Holmes has made it clear he is going to build through the draft. However, big changes could be in store at wide receiver and along the defensive front seven with Kenny Golladay and Romeo Okwara in position to test the market. Read more from Michael Rothstein

The Packers have to decide whether they can afford to keep two members of their top-scoring offense: running back Aaron Jones and center Corey Linsley. There are signs GM Brian Gutekunst wants to add to the receiver group. And cornerback also could vault to the top of its needs if Green Bay doesn’t re-sign Kevin King. Read more from Rob Demovsky

Coach Mike Zimmer said one of his priorities is to get more pass-rushers, after the Vikings notched a franchise-low 23 sacks last season. Melvin Ingram, Bud Dupree and Carl Lawson could be targets in free agency. The offensive line could be another focal point, as they need to upgrade their interior pass protection. Read more from Courtney Cronin

The Falcons have little cap space, but they could make a move for a running back such as James Conner or Leonard Fournette. Finding help for the pass rush and at cornerback could also be in the cards. Read more from Michael DiRocco

Upgrading the quarterback position and rebuilding an offensive line that has only one starter under contract is the focus. Tight end is another need, and Hunter Henry could be a target in free agency. Read more from David Newton

The Saints’ budget will be constrained by the league’s reduced salary cap. Safety Marcus Williams and defensive end Trey Hendrickson are pending free agents who should draw the greatest interest around the NFL. But quarterback Jameis Winston is probably the Saints’ top priority, with Drew Brees expected to retire. Read more from Mike Triplett

Stephen A. Smith and Max Kellerman want the Buccaneers to sign Antonio Brown to a one-year deal.

The Buccaneers have an estimated $24 million in salary-cap space — 13th most in the NFL — and GM Jason Licht and coach Bruce Arians said the priority is re-signing their own. Wideouts Chris Godwin and Antonio Brown and linebackers Shaq Barrett and Lavonte David are among Tampa Bay’s pending free agents. Read more from Jenna Laine

The Cardinals made a big move on Monday by adding All-Pro J.J. Watt to a solid defensive line that already includes pass-rusher Chandler Jones. There are a handful of other positions such as wide receiver, cornerback and tight end that could help Arizona get over the hump and into the playoffs. Read more from Josh Weinfuss

The Rams must find creative solutions in free agency, with three key defensive starters — outside linebacker Leonard Floyd, safety John Johnson III and cornerback Troy Hill — ready to test the market. Adding a deep threat for quarterback Matthew Stafford — acquired in a trade that will become official at the start of the league year — is a priority. Read more from Lindsey Thiry

The 49ers have pressing needs in the secondary and on the offensive line, and they could be involved in the ever-evolving quarterback carousel, if the right opportunity arises. If left tackle Trent Williams leaves, the Niners could chase a pass-rusher such as Shaq Barrett or Yannick Ngakoue. Read more from Nick Wagoner

With less than $10 million in cap space, the Seahawks have to free up money via cuts (Carlos Dunlap?), restructures (Bobby Wagner?) and maybe even a salary-shedding trade just to re-sign some of their own free agents, let alone add players. Read more from Brady Henderson