During the past few days, I have received several calls from the media asking about the potential for wildfires this summer around the region.

They ask:  will this be a major wildfire year with lots of smoke?

There is particular concern about wildfires because of our dry spring.

So let me try to answer this question, using the latest weather forecasts and new insights gained from research on the connection between weather and wildfires over our region.   My analysis will be more nuanced than being provided by some.

Northwest Wildfires Can Be Divided into Three Main Types

There is no such thing as ONE wildfire forecast for the region because the origins of fires differ so radically around the Northwest.  That is why general statements or projections about regional fires are inevitably simplistic and wrong.

As shown below, one can identify three main wildfire areas in the Northwest.

First, there are the forested regions west of the Cascade crest (indicated by the red box below).

Major fires in this area only occur with VERY strong easterly (from the east flow) during late summer, generally at the end of August or early September.  Fires are rare on the west side, but when they do occur they can be large and catastrophic because there is so much fuel.

The fires last summer in western Oregon (September 8-13) were good examples of such fires.  The Tillamook Burns in the Oregon coastal range of the early to mid 20th century are another.

Dry/warm conditions enhance west side fire potential but are not required for such fires. 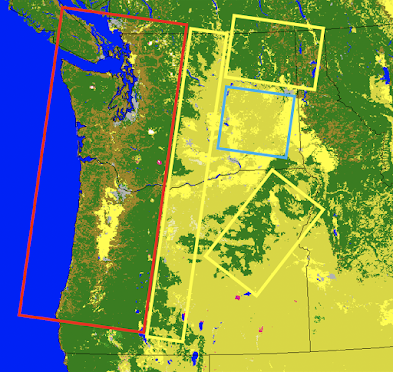 Then there are the grassland and range fires, such as those of the Columbia Basin of eastern Washington (cyan box).  These fires are ignited by humans and lightning and tend to move very fast when winds are strong.  The fuels (grass, small bushes) are dry enough to burn by June every summer and thus the existence of fires is not very climate-sensitive.

Finally, there are the lower to mid-slope fires of the regional terrain east of the Cascade crest (indicated by yellow boxes). This region has Ponderosa pines, western red cedar, and white oaks on the lower slopes, transitioning to Grand and Douglas firs at mid-slope. Lack of snowpack and dry/warm conditions during spring and summer contribute to drying the “fuels” and strong winds have been associated with a number of the major fires.  Ignitions come from human origins and lightning.

So now the predictions for this summer.

West-side fires require unusually strong easterly winds.  Such winds are very dry and their strength can help start fires (e.g., from downed powerlines) and foster their rapid growth and spread.  The easterly winds during the wildfires of last September were the strongest ever observed in western Oregon during late summer.

Why are La Nina years good for strong late summer easterly flow events?  Because there is a tendency to get upper-level ridging in the eastern Pacific, with strong troughs moving down its eastern side.  Such troughs bring strong winds.

Another major positive is the unusually wet period forecast over the western side of the region during the next week.  You don’t see situations that wet in June very often. 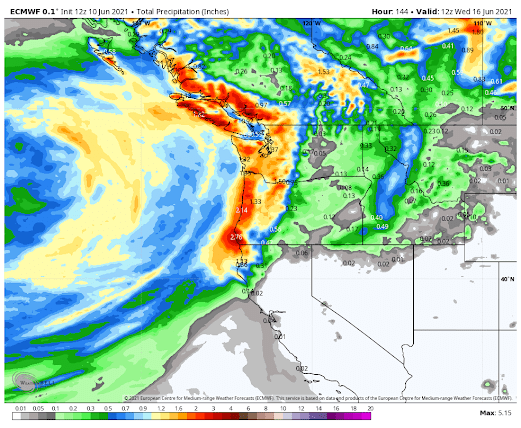 Furthermore, the unusually bountiful late-season snowpack will lead to moistened upper elevations of the westside forests  (see below). 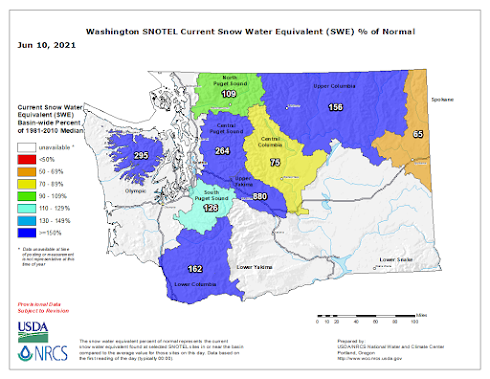 Although not impossible, the probability of a west-side fire like last year should be quite low.

Grass/Range Fires in the Columbia Basin:  Lower Probability Than Normal

By this time each year, the grass/rangeland of eastern Washington is dry enough to burn.    But there are two reasons why one should be hopeful this year.

First, because of the below-normal precipitation this spring the grass is quite sparse, so sparse that ranchers are complaining about lacking forage for their herds. 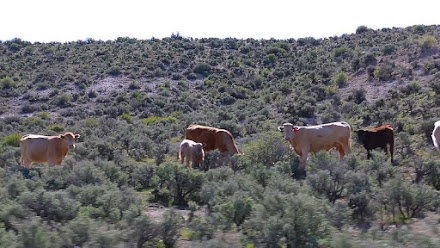 Another region for optimism is about wind.  The large/fast-moving grass/rangeland fires in eastern Washington last Septembler were initiated by and spread by unusually strong winds.  For the same reasons as noted above (end of La Nina), the likelihood of such strong winds (from the north, northeast, and east) are less this year than last.

Lower to Middle Slopes East of the Cascade Crest

This is the area of greatest wildfire threat this year.  Looking at the departure of precipitation from normal, much of eastern Washington has been drier than normal by 0-4 inches, with particular concerns along the eastern slopes of the southern Washington and Oregon Cascades because of the dense, poorly managed dryland forests that are found there. 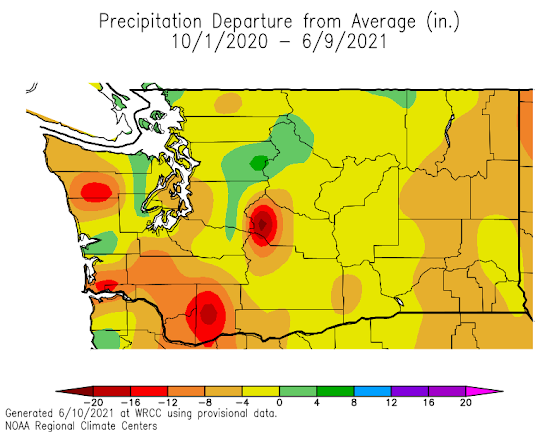 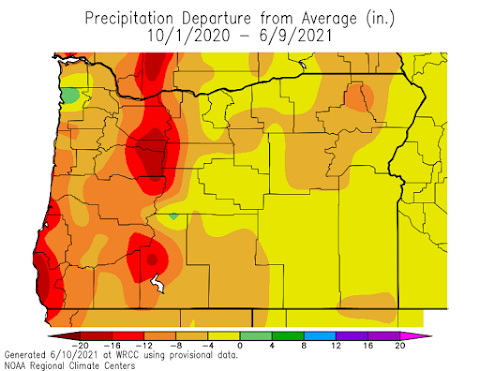 The sparse grasses this year are positive, but what fuels are available are drier than normal (the Northwest  Coordinating Center suggests we are about 3 weeks ahead of schedule).

A favorable factor is the substantial amount of rain expected over the weekend.  Eastern Washington and Oregon could get as much as .5 inches….which is a lot this time of year for that region…and temperatures will be relatively cool.  This kind of rainfall will help suppress the chance of wildfires along the eastern slopes for several weeks.

The bottom line is that there are competing factors regarding eastern slope fires, so that the chance of such fires during the next few months is probably near normal.

We all must be careful not to initiate fires in that environment.  With poor forest management and fire suppression, we have created a dangerously flammable situation on the eastern slopes of the Cascades and in the Okanagan, a situation worsened by frequent human fire ignitions. A River Runs Through Us