TURNING COLDER: A deep upper low will drift just north of Alabama over the next 36 hours, and will bring a raw, winter-like day to the state tomorrow. We enjoyed some breaks in the overcast today, but clouds are increasing this afternoon as clouds around the upper low move into the state. The sky will be mostly cloudy tonight and tomorrow, with periods of light rain and drizzle. Temperatures will hover in the low 50s all day tomorrow over the northern half of the state, which is 20 degrees below average for late October. South Alabama could see some sun tomorrow with a high in the 60s.

HALLOWEEN WEEKEND: Clouds will linger over the northern half of the state Saturday, with some scattered light rain or drizzle… mainly in areas north and east of Birmingham. Temperatures won’t get out of the 50s where clouds hang tough, but South Alabama will see a high around 70 with a mostly sunny sky. Then, on Sunday, look for sunshine back in full force statewide with a high between 68 and 74.

NEXT WEEK: The week looks relatively quiet; the latest global model data suggests some rain possible late Wednesday or Wednesday night. Highs will be mostly in the 60s, and lows mostly in the 40s. But, we are seeing evidence we could drop down into the 30s around November 5-6. See the Weather Xtreme video for maps, graphics, and more details. 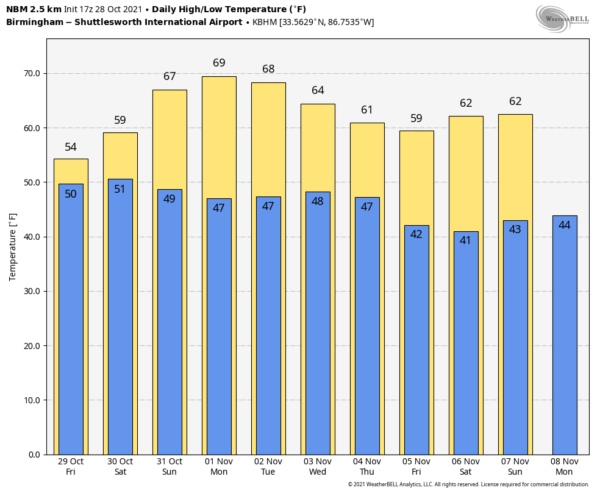 TROPICS: The Atlantic basin remains quiet; a cold core low over the North Atlantic is moving eastward, and most likely won’t acquire any tropical characteristics.

WORLD SERIES: For World Series game 3 Friday night in Atlanta between the Braves and the Astros, the weather will be cloudy with occasional light rain or drizzle; temperatures will be in the low 50s. For game 4 Saturday night, the sky will be mostly cloudy with only a small risk of a shower, temperatures will be in the 48-52 degree range. Then, for game 5 Sunday night, the sky will be clear with temperatures falling from the low 60s into the 50s during the game.

FOOTBALL WEATHER: For the high school games Friday, the sky will be cloudy with some light rain possible; temperatures will hover around 50 degrees at most stadiums.

For the college games Saturday…

WEST ALABAMA AT NORTH GREENVILLE (11:00a CT kickoff at Tigerville, SC): The sky will be mostly cloudy with a few passing showers possible during the game; temperatures will be in the 58-62 degree range.

SAMFORD AT VMI (12:30p CT kickoff at Lexington, VA): Expect a cloudy sky with a chance of rain at times… temperatures will be in the mid to upper 50s.

CENTRAL ARKANSAS AT JACKSONVILLE STATE (1:00p CT kickoff at Burgess Snow Field): The sky will be mostly cloudy with a little light rain or drizzle possible; temperatures will be in the 55-59 degree range during the game.

ALABAMA STATE VS ALABAMA A&M (2:30p CT kickoff at Birmingham’s Legion Field): The sky will be mostly cloudy for the Magic City Classic with a touch of light rain or drizzle at times; temperatures will be in the mid to upper 50s.

BIRMINGHAM SOUTHERN AT BERRY COLLEGE (3:00p CT kickoff at Mt. Berry, GA): A cloudy sky during the game with some light rain possible; temperatures will be in the mid to upper 50s.

ARKANSAS STATE AT SOUTH ALABAMA (4:00p CT kickoff at Hancock Whitney Stadium): The sky will be mostly fair with temperatures falling from near 68 at kickoff, into the 50s by the second half.

OLE MISS AT AUBURN (6:00p CT kickoff at Jordan-Hare Stadium): Mostly fair with temperatures falling from near 54 degrees at kickoff, into the upper 40s by the second half.

ON THIS DATE IN 1999: A Super Typhoon, known as Cyclone 05B reached the equivalent of the Category 5 hurricane on this day. This storm is the strongest tropical cyclone ever record in the North Indian Ocean. Cyclone 05B hit the Indian State of Odisha near the city of Bhubaneswar on October 29. An estimated 10,000 individuals would die from this cyclone, and 1.67 million people were left homeless.

Free Covid tests: Website for ordering at-home tests is up and running